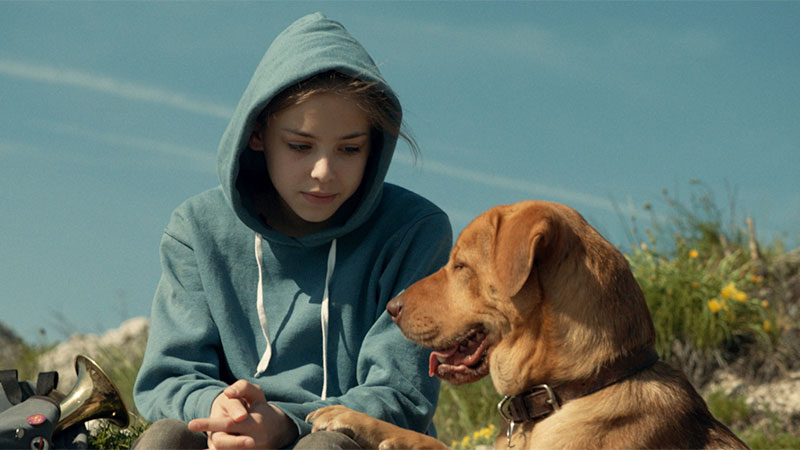 Winner of the Un Certain Regard Prize at the 2014 Cannes Festival, Kornel Mundruczó’s film is a story of the indignities visited upon animals by their supposed human superiors, but it’s also a stark, beautiful metaphor for the political and cultural tensions sweeping contemporary Europe. When young Lili is forced to give up her beloved dog Hagen because its mixed-breed heritage is deemed “unfit” by The State, she and the dog begin a dangerous journey back towards each other. 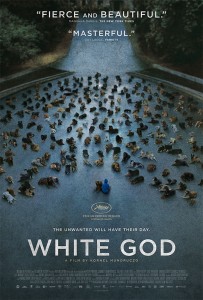 The dogs in the film were also awarded with the Palm Dog Award.

It’s no secret that after the films I’ve made thus far, I am turning towards genre experiments. The first installment of these is WHITE GOD, inspired mostly by increasingly rancorous present-day social relations. In my view, parallel to the questionable advantages of globalization, a caste-system has become more sharply defined: Superiority has truly become the privilege of white, Western civilization, and it is nearly impossible for us not to take advantage of it. Yes, us. Hence, I wanted to create a film which allows a glimpse of the passions raging on the other side, criticizing our detestable self-confidence, full of lies and lopsided truths, set on domesticating the minorities while actually wishing only to destroy them, hypocritically denying inequalities, not believing in either peace or in peaceful cohabitation.

Nevertheless, I have chosen animals as the subject instead of minorities. I did this because I wanted to focus freely on this sensitive subject; as freely and with the least number of taboos as possible. Therefore, I tell the story of animals, a dispossessed species that was once man’s best friend. But man has betrayed them, and in turn, they revolt against their former masters and companions in order to validate their existence.

The film can be described by mingling the words adventure, revenge, rebellion and heroism. I wanted the conventions of vengeance films and the allegorical qualities of animal stories to merge in this film in a dynamic, thrilling and undeniably emotive way.

There is no question that when faced with betrayal and friendship, the audience must take sides. I wanted Lili, the 13 year-old girl, to be our mirror. Through her actions, we will be confronted by the mechanism of conformity. Her coming of age will be the alarming example of what we hope never to raise our children to become. Still, because Lili is a courageous girl with a pure heart, in the end, she is brave enough not to step in line … our line; the line of fathers and parents. She has the courage to rebel and contradict, to lay down her arms, even at the possible cost of her own life.

My goal is for us to root for Hagen and Lili together. For Hagen to fight back; for Lili to understand that Hagen’s rebellion is just. In this way, we too can be cleansed and return home with the knowledge that the decision is in our hands: We have the choice not to become phony, deceitful adults.

My intention was to demonstrate that mankind and beasts share the same universe. Only if we are able to position ourselves in the place of different species do we have the chance to lay down our arms.

INTERVIEW WITH THE DIRECTOR – KORNÉL MUNDRUCZÓ

[accordion][acc title=”Who is the White God? What does the film’s title mean?“]I wanted to place the film in a perspective where we understand that the dog is the symbol of the eternal outcast whose master is his god. I was always very interested in the characteristics of God. Is God really White? Or does each person have their own God? The White Man has proved countless times that he is only capable of ruling and colonizing. The linked words of the title harbor many contradictions, and that’s why I found it so fascinating.[/acc]
[acc title=”This film is different from your earlier works in many ways. Could you explain what your intention was?“]After ten years of work, I felt that a period had come to a definite end. Actually, Tender

Son was the closing sentence of that chapter. I grew up in a way, and so I came to the end of teenage filmmaking. I felt that I was more interested in thoughts that demanded a different form. As a result of massive cultural decline, it was my overt desire to speak to a much wider audience and this required new efforts. But of course, this too is a Mundruczó film, from start to finish.[/acc]
[acc title=”How much was the present political state of Hungary a context in this film?“]The film is much more a criticism of a once and future Hungary, where typically a narrow stratum rules over a greater mass. This is becoming increasingly true for Europe as well. A cluster of the elite reserves its right to power while, as if in a political reality show, politicians are stars that we vote on and off. If we don’t pay attention, one day the masses will rise up.[/acc]
[acc title=”What sort of Budapest did you wish to portray?“]I felt that I had to get rid of post-Soviet, melancholic Eastern European tradition which characterized our films for the past decades. Eastern Europe exists in the midst of massive chaos, mutability and instability; planning ahead is impossible. I tried to create a new Budapest, which expresses a current relationship to the city’s history.[/acc]
[/accordion]