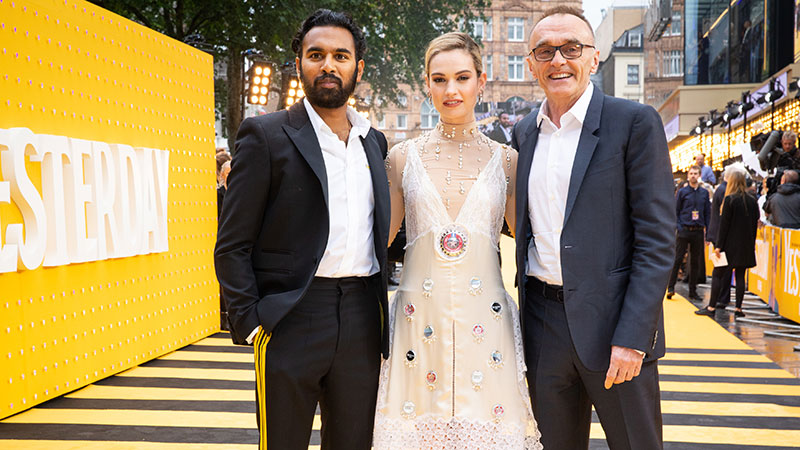 Jack Malik (HIMESH PATEL, BBC’s EastEnders) is a struggling singer-songwriter in a tiny English seaside town whose dreams of fame are rapidly fading, despite the fierce devotion and support of his childhood best friend, Ellie (LILY JAMES, Mamma Mia! Here We Go Again). Then, after a freak bus accident during a mysterious global blackout, Jack wakes up to discover that The Beatles have never existed…and he finds himself with a very complicated problem indeed. 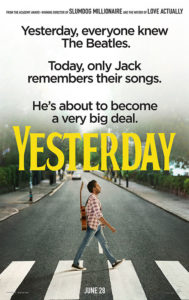 The production returned to Liverpool for a few scenes where Jack flees L.A. on the eve of his album debut to try and connect with the spirit of The Beatles in their own hometown.

It was only natural that Working Title Films would reach out to collaborate with screenwriter Richard Curtis on a passion project that had been bubbling up through the studio’s development channels. Producer Tim Bevan has known Curtis for 30 years, and—from the films of the Bridget Jones series to Notting Hill, Love Actually and About a Boy—every film Curtis has written has been produced by the company that’s synonymous with British cinema.

“One of our producers came to me with Jack Barth’s idea, a story about a musician who remembers The Beatles’ music in a world where no one else does,” Richard Curtis says. “I loved the idea, and at that point told them I didn’t want to read the script…as I would like a crack at it myself. I went away and wrote a film based on that simple-but-brilliant idea. So, whilst the extraordinary premise is Jack’s, the script and shape of the story are mine.”

So, six years after that Olympic triumph, Curtis sent Boyle his draft of Yesterday, but he wasn’t particularly optimistic that Boyle would say yes. “I thought it was unlikely at the time,” Curtis says, both because of Boyle’s busy schedule and the nature of the story.

As Boyle remembers it, Curtis had sent him the script without revealing much about it. “I read it through in one sitting and emailed straight back with a phrase I love that Coleridge used about Wordsworth,” Boyle says. “I wrote, ‘This is unborrowed genius.’ Richard said, ‘Well it’s not actually. It’s based on a story that’s already been written, and I’ve rewritten it.’ Anyway, it was a wonderful surprise and a delight to see: this simple idea of everybody forgetting The Beatles, apart from one struggling singer-songwriter from Suffolk.”

Once Boyle was onboard, he asked Curtis to change about a quarter of his working script, and a percentage of what Curtis had written was altered completely. “Writing is always a process of change,” Curtis says. “By the time it’s edited you end up cutting 25 pages completely, so I’m not the slightest bit sensitive about it. It was all for the better.”

Himesh Patel was not considered an obvious choice when casting director GAIL STEVENS and her assistant, REBECCA FARHALL, first presented him to Boyle. “They brought in this guy, saying he’s on EastEnders,” Boyle says.

Casting Patel, who is relatively unknown outside the U.K., may have seemed like a risk, but the decision to catapult him into the global spotlight mirrored the rise of The Beatles themselves. John Lennon, Paul McCartney, Ringo Starr and George Harrison were just lads from Liverpool who created something extraordinary, and in so doing made an extraordinary impact on the world. “Danny and I absolutely loved Himesh,” Curtis says. Indeed, to watchers of the BBC One prime-time soap opera EastEnders, which has been on the air since 1985 and has become a cultural institution in Britain, Patel is a household name, having grown up on the show playing Tamwar Masood for nine years.

Accompanying Patel on his journey into the alternate world created by Boyle and Curtis is Lily James, who plays schoolteacher/manager/long-suffering friend Ellie. James first came to prominence on the small screen starring as Lady Rose MacClare in Downton Abbey before making the leap into film with Wrath of the Titans. Her career has continued to flourish, and with recent critically acclaimed performances in Darkest Hour, Mamma Mia! Here We Go Again and Baby Driver, she was a canny choice to play Ellie.

Another indisputable star of the film is Yesterday’s principal location, Suffolk, and its borders. Central to Jack’s emotional journey, it’s where the film begins and ends, both literally and metaphorically. This is not the first time Curtis has set a story in Suffolk, but it is the first time he’s been able to lens there. “I wrote About Time about Suffolk,” the writer/producer says. “It all took place in a house by the sea, but we just couldn’t find the right house, so we had to move the whole thing to Cornwall. It’s quite nice this time we’ve been allowed to set it in the place it was written about.

The film ended up being shot all along the east coast of England, starting with Clacton-on-Sea and reaching all the way up to Gorleston-on-Sea. “Danny wanted to understand Suffolk and whilst Richard showed him around, Danny went for the harder-edged ‘Danny Boyle’ Suffolk rather than Richard’s softer side of Suffolk,” producer Bevan says.

Curtis and Boyle, both huge Beatles fans, would not have made the film without the blessing of the surviving members of the band, Paul McCartney and Ringo Starr, and the estates of John Lennon and George Harrison. From the strength of those relationships, and with the approval of the musicians and their families, the production was then able to move forward and secure the composition rights to The Beatles’ songs for Patel to record for the film.