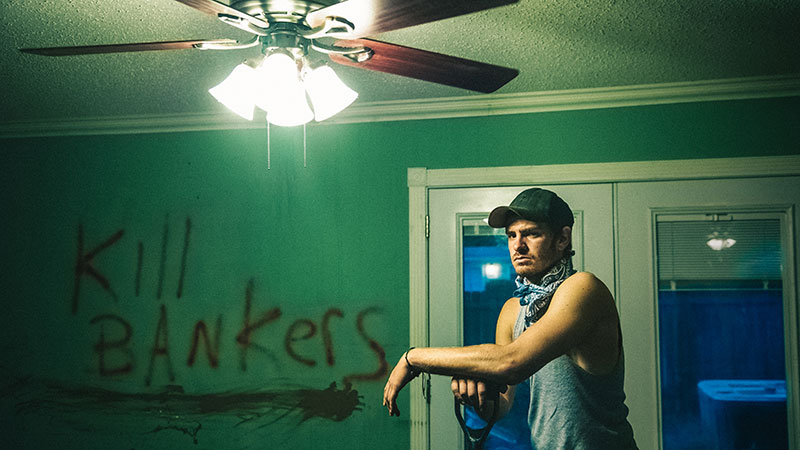 A propulsive, timely thriller unfolds against an ageless story of greed, injustice and a man confronting a corrupted system in 99 HOMES. The film showcases three electric performances as Michael Shannon, Andrew Garfield and Laura Dern play out an escalating battle of money, morals and wills. 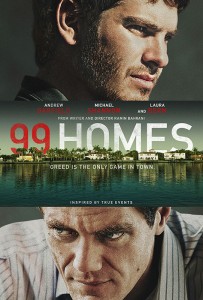 The irreconcilable differences between struggling homeowners and wealthy realtors led
writer-director Ramin Bahrani to his title. On the one hand, the title refers to the big payday Carver and Nash are hustling towards. But in addition, Bahrani liked that 99 HOMES echoes Nobel Prize-winning economist Joseph Stiglitz’s coining of the now-ubiquitous phrase “the 99%” – referring to the vast majority of the world’s populace who don’t enjoy the mega-wealth of the 1%, who partake in nearly a quarter of the world’s riches.

From the start, writer-director Ramin Bahrani knew he wanted to set his story in Florida – the sun-soaked Southern state where real estate boomed explosively, then crashed like nowhere else. He began the process of making 99 Homes with an eye-opening journey to the panhandle.

“I started researching by reading books and articles about the financial crisis, but I really like to be on the ground, so I started spending time in Florida,” Bahrani explains. “I visited the foreclosure courts, what they call the ‘rocket dockets,’ where they decide your fate in 60 seconds flat.”

Bahrani also spent time with those who were cheated. These included Lynn Szymoniak, a West Palm Beach fraud attorney who was shocked to find herself suddenly foreclosed upon for no apparent reason.

Bahrani wrote the film with Amir Naderi, an accomplished international filmmaker in his own right whose films include the Iranian classic THE RUNNER. Together they fleshed out a story Bahrani developed with his long-time collaborator Bahareh Azimi.

To play Rick Carver, a real force of personality was required. The filmmakers were in search of someone capable of taking a character into most the depraved, devilish recesses of unapologetic greed and fraud – but without ever forsaking a charisma, an unbowed spirit and a defiant wit that are ferociously seductive. Ramin Bahrani chose Michael Shannon.

“I started by spending time with a broker down in Florida and getting a sense of what this world was like firsthand. In terms of drama it’s kind of tough to beat,” Shannon muses. “It’s a mindbogglingly intense situation on both sides of it – both for the people losing their homes and for the people who show up at the door telling them they have to leave. It did confirm some of my worst suspicions that real estate can be an incredibly corrupt and sinister business.”

To play Dennis Nash, whose fight for his home becomes a battle for his soul, Ramin Bahrani needed a kind of everyman who could go all the way into an ordinary father’s worst nightmare. He made an unusual choice in Andrew Garfield… the amazing spiderman. Garfield recalls wanting to get under Dennis Nash’s skin within the first 30 pages of the screenplay. “That first act is so intense as the Nash family’s eviction sets the rest of the story in motion.” Garfield, too, prepared to play Nash with intensive research — meeting with families who had undergone their own life-altering evictions.

To play Lynn Nash, the mother who has so much pull on Dennis that he refuses to tell her he’s working for Carver, Ramin Bahrani turned to one of today’s most sought-after actresses: Laura Dern. The film’s topical themes were a magnet for Dern. “This is a story that many millions of Americans have walked through in the last several years so that really interested me,” she says.

The look of 99 Homes hearkens back to pure cinema – cinema with a spare, minimalist, documentary-like urgency – but mixed with the dynamism of a modern thriller. Ramin Bahrani worked closely with cinematographer Bobby Bukowski, to give the film an accelerating kinetic rhythm. Bukowski aimed at contrasting worlds, shooting the Nash family home tighter, hand-held and warmer, while bringing a wide-lens, cold, smooth steadicam approach to the Carver mansion. He also brought an unflinching realism to the eviction scenes, which were shot in 10-minutes long takes, using practical lighting so that the actors could roam freely around the threatened house.