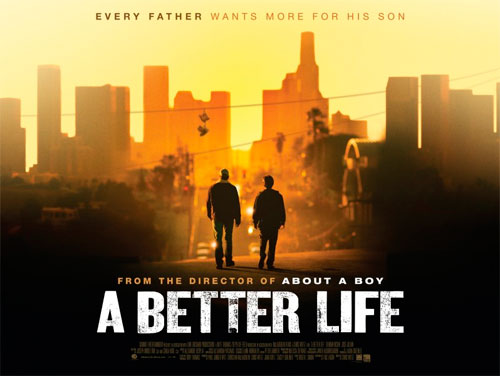 From Chris Weitz, director of About a Boy and producer of A Single Man and In Good Company, comes A Better Life – a poignant, multi-generational story about a father’s love and everything a parent will sacrifice to build a better life for his child. The movie stars Demian Bichir and José Julián and was written by Roger L. Simon. 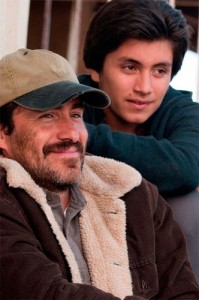 The first actor cast in A Better Life movie was famed Mexican actor, Demian Bichir, in the pivotal role of Carlos Galindo.

Carlos Galindo dreamed of good things for his wife and future son when they crossed the border into the US.  But when his wife left him, wanting more than he could give, Carlos’ only goal became to make sure his son Luis was given the opportunities he never had. After years of hard work and trying to set an example for his child, he still finds himself drifting apart from Luis, now a teenager, who is susceptible to peer pressures that could lead him down a dangerous path.

In 2008, the United States Census listed the percentage of “persons of Hispanic or Latino origins” in Los Angeles as 47.7%. That figure doesn’t include the many undocumented people, usually seen congregating at corners near construction sites, doing odd jobs each day, including tending to gardens all over the Southland, just to make ends meet. As contemporary as A Better Life seems, however, producer Paul Junger Witt has spent 25 years bringing this story to the screen.

“We have this invisible population in Los Angeles, that because we’re so geographically separated in Los Angeles that we really don’t know who we live with in the way that people in cities that have a smaller geographic area or have a public transportation system come to know one another. I started thinking about it as a film,” Witt says.

Witt began working with Roger L. Simon to draft a script based around this concept.

“It was a pleasure to work for several years on what became A Better Life. Rarely do you get a chance in Hollywood to devote your talents to such a socially and emotionally meaningful project,” Simon conveys.

As luck would have it, about 25 years later, Paul Junger Witt shared office space with producer Christian McLaughlin. “I gave him one of the drafts to read and Christian responded as I had,” Witt explains.

The office neighbors became friends and McLaughlin was eager to work with the famed producer of films such as Three Kings and Dead Poets Society.

Eventually, McLaughlin would bring screenwriter Eric Eason into the process. He and Witt made the risky bet of paying him themselves, in order to retain creative control of the story.