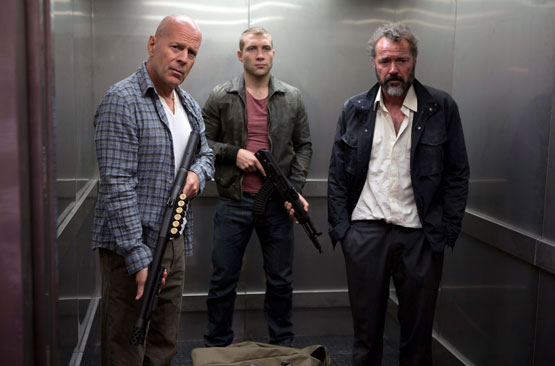 It is now 25 years since Die Hard exploded into theaters, launching a new cinematic hero, John McClane, and changing the paradigm of action movies. McClane is identifiable and relatable.  An ordinary man forced by circumstances to attempt an extraordinary task.  That is what separates him from the comic book heroes of most action movies, and has made McClane one of the most popular characters in film history. 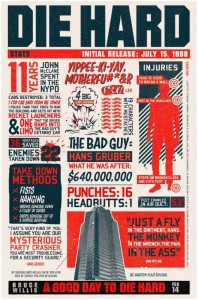 This beautiful ballroom, which took months to build and light, was systematically destroyed during more than a week of shooting. During a confrontation with Alik, the McClanes are fired upon by a helicopter hovering just outside the ballroom. The amount of destruction is epic, even for a Die Hard movie.

Bruce Willis reprises his iconic role as police detective John McClane in A Good Day to Die Hard, set against the backdrop of deadly corruption and political vendetta in Russia.  McClane arrives in Moscow to track down his estranged son, Jack, (Jai Courtney), and is stunned to discover he’s working undercover to protect a government whistleblower, Komarov.  With their own necks on the line, the McClanes are forced to overcome their differences in order to get Komarov to safety and thwart a potentially disastrous crime in the most desolate place on Earth – Chernobyl.

The premise for the script (written by Skip Woods and Jason Keller) originated with an idea from Bruce Willis, who was interested in exploring a father-son story against a dangerous backdrop that would force them to find a way to overcome their differences to survive.

Says producer Alex Young: “The question became, how can we take the spine of this – a relationship between a father and son, who are cut from the same cloth but have a strained past and big misunderstandings – and put them in a place where they’re trapped and can’t call for help?”

Producer Wyck Godfrey says the challenge of seeing McClane “apply his skills in a foreign land, where he’s a fish out of water, is an intriguing element of the movie. He doesn’t know the language, the culture or the lay of the land, so he has to do something he hasn’t done before – rely on someone else.”

The bank interior is the largest and most interesting of the film’s interior sets, measuring 300 feet long and 60 feet high.  Covering two full soundstages, it encompassed an exterior façade, a cavernous lobby, a large circular steel door, a safe deposit room and a hidden door and secret vault lined with metallic shelves and cases.  The rusted, heavy metal interior of the vault lends a creepy science fiction look to the sequence.