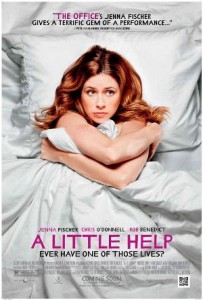 Rob Benedict isn’t the only actor who found a lot to identify with in his character. Daniel Yelsky, whose poignant turn as Dennis Pehlke lends the story so much of its emotional weight

A LITTLE HELP is the story – funny, touching, sad, and real – of an ordinary person, engulfed by ordinary events, making an extraordinary emotional journey.

In his debut feature, celebrated television writer/producer Michael J. Weithorn (Family Ties, The King of Queens) creates an unforgettable portrait of a woman whose life is coming apart at the seams, and the strength she discovers within herself to knit that life back together.  A warm, richly funny and deeply human drama in the tradition of such filmmakers as Alexander Payne, Kenneth Lonergan and Noah Baumbach, A LITTLE HELP introduces filmgoers to the vibrantly flawed Laura Pehlke, and to a fully-formed cinematic voice whose insight, sympathy and left-field humor make Laura’s struggles our own.

“By far and away, the main thing that made me want to direct A LITTLE HELP was the wonderful script,” states Weithorn.  “Now, I should mention,” he continues, laughing, “I wrote the script.  So perhaps in a sense I was not approaching it objectively.  But I still liked the script a lot.”

A LITTLE HELP is set in Port Washington, Long Island, not far from where the filmmaker grew up.  “That’s just me being lazy,” he deadpans.  “Instead of being creative and inventing something, I’m just using a place where I know that all this stuff exists.”  But the setting, with its geographic and emotional proximity to New York City, proved to be an ideal locale for Weithorn’s evocative film. “The town has a lot of personality to it, and it really felt like the right place to set this particular story,” he observes.  “It’s kind of a general suburban environment, but behind every door there’s something very intense and dramatic going on.”

With the script finished in 2005, the film took several years to come together.  The key moment in its journey to the screen was almost certainly Jenna Fischer’s response to the story.  “I loved the role of Laura immediately,” states Fischer. “It’s rare to find a script with such a strong female role.   She was tragic and sad, but warm and funny at the same time.  I met with  Michael, and I loved his take on the character.”