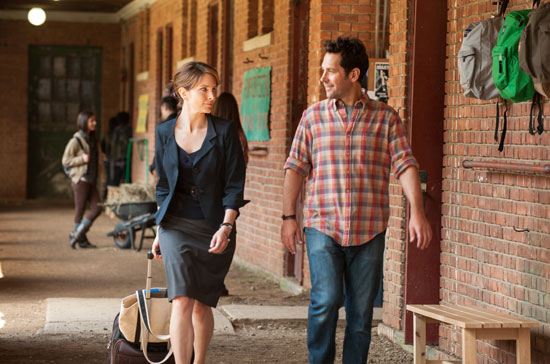 Tina Fey and Paul Rudd are paired for the first time on-screen in Admission, the new comedy/drama directed by Academy Award nominee Paul Weitz, about the surprising detours we encounter on the road to happiness. The film is based  on the novel by Jean Hanff Korelitz. Screenplay by Karen Croner. Directed by Paul Weitz. A Focus Features Release. 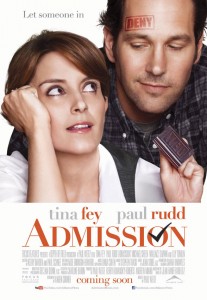 As production on Admission neared its close, the production finally made it to Princeton University for several days of location filming on campus and in the town of Princeton, NJ.

What draws storytellers to explore a unique and specific high-stakes world? In the case of Admission the pull of Ivy League academia, according to producer Kerry Kohansky-Roberts, provides “the perfect setting for blending deftly nuanced comedy with drama.”

Novelist Jean Hanff Korelitz thought so too, writing her 2009 novel Admission as a multilayered exploration – not only of the intensely competitive world of the college admissions process but also of the attendant emotions at the center of the experience.

The author felt that the protagonist should be neither a student nor a professor. She notes, “I wanted to look at the kind of person who becomes an admissions officer, someone whose job it is to fend off the anxieties and loathing of all of us on the outside. Who does that, and what’s it like to be them?”

Utilizing as many practical settings as possible was essential to meeting a streamlined filming schedule and budget. The majority of the locations were in New York State; the latter’s versatility afforded a multitude of options to recreate the story’s locales of rural New Hampshire, leafy suburban New Jersey, a sprawling country estate, and the hushed gentility of some of the top private schools along the Eastern seaboard.

For New Quest, John Pressman’s experimental high school where learning is valued for its own sake, an equine training center in Old Westbury, NY provided the requisite bucolic setting. At HorseAbility, the filmmakers had access to an open-air courtyard and a farmyard; production designer Sarah Knowles and her department fashioned rustic classrooms. Four-legged animals joined the principal cast members for several days of filming there, as Fey, Rudd, and Wolff found themselves working with a cow for a calf-birthing sequence. Rudd praises the cow as being “sweet, but huge. It was hard to see past our new costar, spending the day filming in a small pen.

“The flies loved us that day, because we were smeared with this goop made of syrup and some other gelatinous substance. Our clothes were stuck to us. Sometimes, filming a movie stinks.”

I’ve written plays with female protagonists but am embarrassed that I haven’t directed a movie whose clear lead was a woman. I wanted to spend time with this character, Portia Nathan.

I was very lucky to work with Tina Fey on Admission. Her breadth of intelligence and her lack of pretentiousness are qualities I aspire to. Reading her book Bossypants was a good cheat-sheet for directing her.

Thematically, I like stories of screwed-up people who think they don’t have anything to offer emotionally but who cobble together an unconventional family. It’s a fable, but one might as well tell that kind of fable as the pace of cultural change speeds up. We can either get over our germ phobia and link hands or go flying off the centrifuge.