Alice in Wonderland is a 2010 fantasy adventure film directed by Tim Burton, written by Linda Woolverton, and starring Mia Wasikowska, Johnny Depp, Helena Bonham Carter, Anne Hathaway, Crispin Glover, Michael Sheen and Stephen Fry and released by Walt Disney Pictures. It is an extension of Lewis Carroll’s novels Alice’s Adventures in Wonderland and Through the Looking-Glass. The film uses a technique of combining live action and 3D animation. 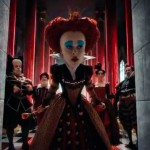 On February 12, 2010 major UK cinema chains, Odeon, Vue and Cineworld, had planned to boycott the film because of a reduction of the interval between cinema and DVD release from the usual 17 weeks to 12. A week after the announcement, Cineworld, who has a 24% share of UK box office, chose to play the film on more than 150 screens.

In the film, Alice is now nineteen years old and accidentally returns to Underland (misheard by Alice and believed to be called Wonderland), a place she visited thirteen years previously.

She is told that she is the only one who can slay the Jabberwocky, a dragon-like creature controlled by the Red Queen who terrorizes Underland’s inhabitants. Burton said the original Wonderland story was always about a girl wandering around from one weird character to another and he never felt a connection emotionally, so he wanted to make it feel more like a story than a series of events. He does not see this as a sequel to previous films, nor as a re-imagining.

It premiered in London at the Odeon Leicester Square on February 25, 2010, and was released in Australia on March 4, 2010, and the United States and the United Kingdom on March 5, 2010, through IMAX 3D and Disney Digital 3D, as well as in traditional theaters.

Troubled by a strange recurring dream and mourning the loss of her beloved father, nineteen-year-old Alice Kingsleigh attends a garden party at Lord Ascot’s estate, where she is faced with the expectations of marriage and of the society in which she lives. Unsure of how to reply and increasingly confused, she runs away to chase after a rabbit in a waistcoat, and accidentally falls into a rabbit hole. She is transported to a world called Underland where she is greeted by the White Rabbit, the Dormouse, the Dodo, and Tweedledum and Tweedledee.

They argue over her identity as “the right Alice,” who it is foretold will slay the Red Queen’s Jabberwocky on the Frabjous Day and restore the White Queen to power. They consult Absolem the Caterpillar, who decides that she is “not hardly Alice.” The group is then ambushed by the Bandersnatch and a group of playing-card soldiers led by the Knave of Hearts. Alice escapes and flees into the woods.