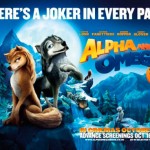 The film was released on September 17, 2010 to 2,625 theaters by Lions Gate Entertainment. It has been shown in its 3-D format.

The film took in $2,288,773 on opening day, and $9,106,906 on its’ opening weekend domestically, reaching fifth place at the box office. The films’ opening was mildly disappointing, as it had only earned a fraction of 2010’s other animated films. In its’ second weekend, due to being overshadowed by Legend of the Guardians: The Owls of Ga’Hoole for 3-D screens, the film dropped 48% to $4.8 million and eighth place.

In its’ third weekend, the film held better with a 37% drop to around $3 million and finishing in tenth place. The film in 17 days has earned $19 million domestically and $23 million worldwide, though it has yet to open in many foreign markets.

Produced on a $20 million budget, the film will probably end up becoming a minor box office success. The film has officially surpassed Happily N’ever After to become Lionsgate’s highest-grossing animated feature to date.