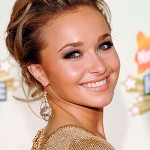 Panettiere has dated heavyweight boxer Wladimir Klitschko. She was ringside for his knockout victory over Samuel Peter on September 11, 2010

Hayden Leslie Panettiere is an American actress and singer. She came to professional prominence at the age of 10 with her portrayal of Sheryl Yoast in Disney’s Remember the Titans, although for five years before that, Panettiere had held roles in two soap operas.

Panettiere was born in and partly raised in Palisades, Rockland County, New York, the daughter of Lesley R. Vogel, a former soap opera actress, and Alan L. “Skip” Panettiere, a fire department lieutenant. Panettiere is of Italian descent, her surname meaning “baker” in Italian. She has one younger brother, fellow actor Jansen Panettiere.

Although Panettiere attended South Orangetown Middle School in New York, she was educated at home from the 9th grade through high school. For now, Panettiere is postponing higher education in favor of an acting career.

Panettiere first appeared in commercials at 11 months, beginning with an advertisement for Playskool. For her performance in Lifetime Television’s 1999 TV movie If You Believe, she was nominated for the Young Artist Award for Young Actress Age Ten or Under in the category of Best Performance in a TV Movie or Pilot.

Panettiere has a tattoo of the Italian words Vivere senza rimipianti running down the side of her left flank. The word rimpianti is misspelled in what otherwise would mean “To Live Without Regrets”

In 2007, Panettiere became an official supporter of Ronald McDonald House Charities and is a member of their celebrity board, called the Friends of RMHC