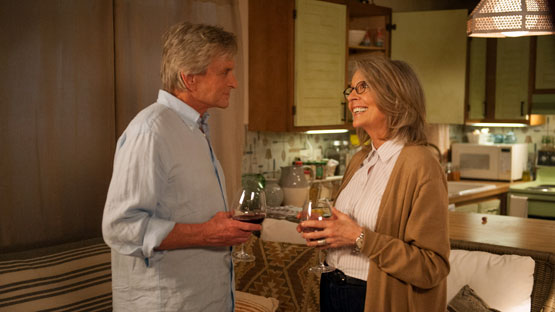 Director Rob Reiner knows about comedy, and he’s certainly proven that he knows how to successfully fuse humor and romance. He kept audiences craving for Meg Ryan and Billy Crystal to somehow get together in his 1989 comedy classic WHEN HARRY MET SALLY. AND SO IT GOES centers around a once-successful real estate broker named Oren Little, whose wife passed away several years earlier after a protracted battle with cancer. Oren is played by Oscar®–winning actor Michael Douglas, making his second film with Reiner at the helm. 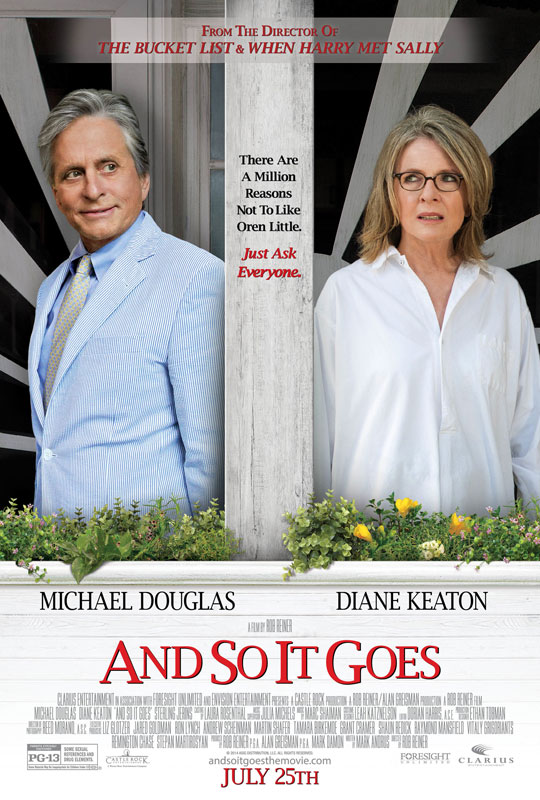 While the score for the film was written by Marc Shaiman, Rob Reiner himself selected the terrific group of songs heard throughout the film, representing tunes from Leah and Oren’s prime.

The idea for the film came about during the press junket for Reiner’s 2007 hit, THE BUCKET LIST, starring Jack Nicholson. “Every single journalist asked the same question,” the director recalls, “’what’s on your bucket list?” Reiner’s longtime producing partner, AND SO IT GOES producer Alan Greisman, remembers the classic Nicholson answer. “He thought for a minute and then he replied, ‘I sit in my living room with my feet up on the coffee table smoking a cigarette, and I ask myself: is there time for one more great romance?’ I went up to Rob and said, ‘This is a great idea for a movie.’” The gears began to turn, and the subject of a new picture was hatched. Explains Reiner, “That struck me – people finding each other at a certain point in life, a later point in life.”

Scribe Mark Andrus, who had written another Nicholson hit vehicle, 1997’s AS GOOD AS IT GETS, came aboard to develop a script for the film. “The main idea,” says Reiner, “is about people who have decided that they’re done, they’re not going to be involved romantically again. And somehow they find each other.”

Diane Keaton was drawn to the project from the beginning. “Everything was appealing to me with this project. I got to play opposite Michael Douglas, the script, the chance to sing. When I was young, I had a fantasy that I wanted to be singer, and I thought that I was going to try to be in musical comedies, but to have this given to me – the opportunity to sing four songs in the movie – is just a dream come true.”

Oren and share Leah space in Little Shangri-La, a fascinating, lovely set built over a five-week period by production designer Ethan Tobman and his team, prior to the film’s 5-½ week shoot in June and July 2013.

The script for AND SO IT GOES originally set the story in the San Diego area, with images of bungalows and fourplexes coming to mind as planning began. “The script had that kind of architecture where people have concrete cutouts and shared balconies and staircases,” Tobman informs. But as the project evolved, Reiner and the producers decided to shift the setting to New England.

Finding a location for such a structure wasn’t easy – in fact, it was impossible. After six weeks looking from New Jersey to the Hamptons to the Connecticut coastline, Tobman eventually found a town in Connecticut called Black Rock, just outside Bridgeport on Long Island Sound, which appeared to fit the bill.  Tobman found a two-story duplex on a dead-end street on Burr Creek, which had the makings of what was needed for Little Shangri-La. “It was a two-story unit, shared by two people, with entrances on the first floor,” the designer describes. “So each tenant had a two-story duplex. We needed to make it look like four separate units.” Trellises, balconies and spiral staircases were added, to give the illusion of four individual residences.