Badmaash Company (stylised as Badmaa$h Company; Hindi: बदमाश कंपनी), literally meaning “Rogue Company”) is a 2010 Bollywood film directed by actor-turned-director Parmeet Sethi, produced by Aditya Chopra and starring Shahid Kapoor, Anushka Sharma, Meiyang Chаng and Vir Das in the lead roles. The film was released on 7 May 2010 under the banner of Yash Raj Films. The trailer of the film was premiered on Yash Raj Films’ YouTube channel on 23 March 2010. 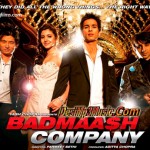 Parmeet Sethi wrote the script of Badmassh Company in only six days. The four main characters are all based on real-life people. Filming locations for the film included New York, Atlantic City, Philadelphia, Bangkok, Mumbai, and Hyderabad.

After the government in India decides to reduce import duty on foreign packaged goods, the friends decide to go to America. Karan and Bulbul fall in love, and Karan leaves home when his father finds out that he is working with a smuggler. Later Karan becomes too greedy and the group begins to break up. Karan tells Zing that his drinking is embarrassing the group. Bulbul leaves when she finds out that Karan married another woman for a green card. Chandu marries and quits the company to start a video store.

Karan then visits India, where he secretly attends a function where his father is honored. On his return to America, Karan is arrested and put in jail for 6 months. He realize his mistake, when he has to pay a huge sum of money to bail himself out. Bulbul comes and gives up Chandu’s, Zing’s and her share from what they earned in the company.After being released from jail, Karan starts working with his uncle.

He makes up with Bulbul, who is revealed to be pregnant with his child. He patches up with Zing and Chandu, while saving his uncle from a huge financial loss. At the end, “Friends and Company” becomes a public limited company, and Karan makes his father proud.

The soundtrack of the film is composed by Pritam Chakraborty while the lyrics are penned by Anvita Dutt Guptan.