From the whimsical mind of director Tim Burton, BIG EYES tells the outrageous true story of one of the most epic art frauds in history. In the late 1950s and early 1960s, painter Walter Keane had reached success beyond belief, revolutionizing the commercialization of popular art with his enigmatic paintings of waifs with big eyes. The bizarre and shocking truth would eventually be discovered though: Walter’s works were actually not created by him at all, but by his wife Margaret. 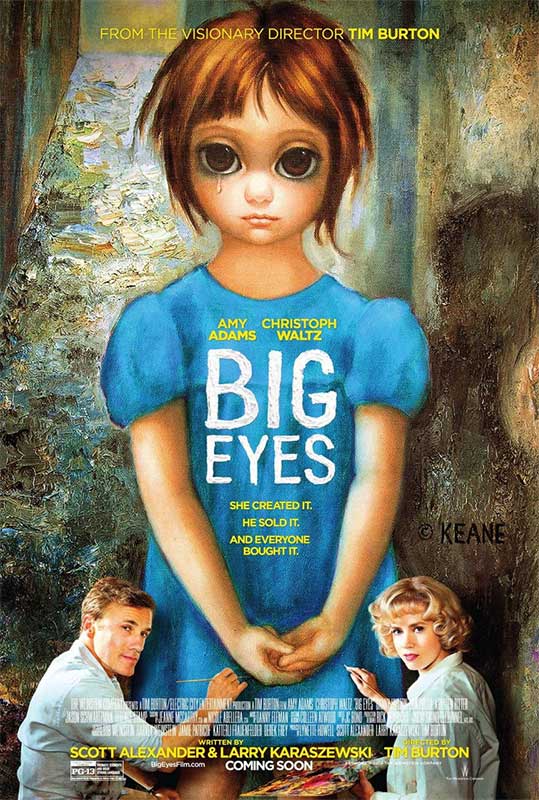 Margaret Keane makes a cameo appearance in the film in a scene filmed in San Francisco at the Palace of the Arts.

In 2003, writing partners Scott Alexander and Larry Karaszewski learned the stranger than fiction story of Margaret and Walter Keane, the top selling painters of the 1960s. Intrigued, they began to research a story that would take ten years to finally go into production. “It’s a great piece of history that nobody knows,” says Alexander. “If it weren’t true, I wouldn’t believe it.”

The writers spent weeks at libraries and pouring through San Francisco newspaper stories in microfiche archives, trying to piece together the sensational tale of the Keanes. “It was hard to get a straight story,” says Alexander, and they set out to meet with Margaret. “We needed to be able to earn her trust and show that we had integrity.” Margaret Keane agreed to sell Alexander and Karaszewski the rights to her life as well as her art.

A passion project for Producer Lynette Howell she worked closely with the writers for five years. “It went through many stops and starts and ups and downs, as lots of independent movies do,” she says. “And there’s always that surprise when suddenly a director like Tim Burton says I actually want to direct that movie.” Four-time Academy Award-nominee Amy Adams had read the BIG EYES screenplay early on, but she wasn’t prepared to do it at first.  However, when she next saw the script, things had changed. The actress and the artist spent half a day together.

While Amy Adams did extensive research, met Margaret Keane and wanted to get to know the real life person she was portraying, Christoph Waltz had a different approach and relied strictly on the script. He says, “I stayed away from everything that might resemble real life in reference to Margaret and Walter and this whole thing because what am I supposed to do with it? I’m not making a documentary, I’m playing a part and I think drama has a different purpose in our lives and our society.”

In the summer of 2013, BIG EYES filmed on location in Vancouver, Canada, as well as San Francisco and Hawaii, where the film is set. Vancouver locations included historic Stanley Park and the Gastown district. The hungry i was recreated at the Penthouse Nightclub. The courtroom scenes were filmed at the Art Gallery of Vancouver. The Keanes’ magnificently “modern” Woodside home was created in a house in the Southlands neighborhood. In Hawaii, locations included the Honolulu Federal Court House and the landmark Royal Hawaiian Hotel in Waikiki.

The producers worked with Margaret Keane and her gallery to get copies of her art and permission to reprint. As films are not always shot in chronological sequence, some paintings in the film required as many as 10 versions to depict the work in its various stages of completion.