Big Mommas: Like Father, Like Son (also known as Big Momma’s House 3) is a crime comedy film directed by John Whitesell and written by Matthew Fogel and Don Rhymer. The film is the second sequel to Big Momma’s House (2000) and starring Martin Lawrence reprising his role as FBI agent Malcolm Turner. 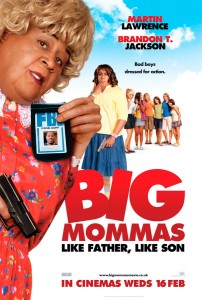 Jascha Washington, citing how bad these movies are, declined to reprise his role as Trent Pierce from the first two films, and Brandon T. Jackson replaced him for his role. The cast also includes Jessica Lucas, Sherri Shepherd, Portia Doubleday and Faizon Love.

A slightly aged Malcolm Turner (Martin Lawrence) has been frequently going undercover as “Big Momma” for the last 7 years. This time around, his teenage stepson Trent Pierce (Brandon T. Jackson) visits him while he is working on a case and witnesses the criminal murder of somebody.

To keep Trent safe, Malcolm goes undercover as Big Momma for the third time. In addition to this, Trent also goes undercover as Big Momma’s great niece “Charmaine Daisy Pierce” at a performing arts’ school for girls. Meanwhile, Trent tries to develop a romance with one of the girls as his real self while “Big Momma” is being pursued by the school’s goofball janitor Kurtis Kool (Faizon Love) who has a fascination with big women.

A music video titled “Imma Do It Big” was released on February 9, 2011. The song is by Brandon T Jackson and features One Chance & T-Pain. Brandon spits his verses to the camera in a warehouse with several pals before appearing later as his alter ego from the movie. T-Pain and One Chance who lend their vocal to the song make a brief appearance. Random scenes from the “Big Momma’s House 2” sequel are flashed as well.

But it’s not just “Big Momma” that gets all the love in the video, even if it gets the biggest chunk of screen time – don’t miss Jackson’s mid-video transformation into his “Big Momma” character, for example – because there’s also a blink-and-you’ll-miss-it reference to “Avatar” early on in the video. That’s never a bad thing.