Black or White is the story of a grandfather (Kevin Costner) who is suddenly left to care for his beloved granddaughter. When her paternal grandmother (Octavia Spencer) seeks custody with the help of her brother (Anthony Mackie), the little girl is torn between two families who love her deeply. With the best intentions at heart, both families fight for what they feel is right and are soon forced to confront their true feelings about race, forgiveness, and understanding. 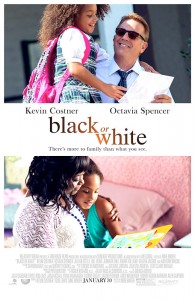 By being involved as a producer, Kevin Costner ensured that key moments in the script were not lost.

Black or White was inspired by writer-director Mike Binder’s own family, in which his wife’s sister died, leaving a seven-year-old, biracial boy without parents. Binder and his wife, Diane, and one of her brothers stepped in to help raise the child, bringing him from their Santa Monica home to his estranged father’s family in South Central, Los Angeles for weekend visits. Binder was struck by the dramatic differences between the two worlds, as well as by the families’ similarities. “I wanted to do a piece about where we go forward in racial relations in this country,” he says. “I wanted us to have a conversation.”

Binder reached out early to Costner. He’d been sending the actor scripts ever since they first collaborated on 2005’s The Upside of Anger. “He’s so prolific as a writer,” says Costner. “All the scripts were good, and they kind of smelled like me. [But] they were all near-misses for me.” The actor passed on every one, until Black or White. “I was taken with the first page of the script,” he says. “I was emotional, and that’s hard to do—to do emotion off of a page in a script and to do so early on in a script. A lot of times you can build something to the point where you’re terribly moved, but Mike’s writing was very precise.”

And yet even a captivating script by a proven screenwriter is not necessarily enough to attract the financing needed to produce a film. So Costner stepped in to help finance Black or White himself, a move he hasn’t made on a film he’s starring in since 1990’s Dances with Wolves.

Black or White is anchored by three exceptional leading performances: Kevin Costner, who has never been in finer form; Octavia Spencer, who commands attention in every frame; and Jillian Estell, who at seven years old gives a dazzling big-screen debut.

[blockquote style=”2″]Black or White is inspired by a situation in my own life. Several years ago, my wife’s sister passed away at 33. She had a seven-year old son, who is biracial. His father is out of the picture, but his father’s family lives in South Central, Los Angeles; they are terrific and very involved in his life. But my wife and I, along with several members of her family- as well as several members of his father’s family- all ended up raising him together. In many ways, he grew up in two completely different worlds: Santa Monica and South Central. He was a happy kid and everyone else made a much bigger deal out of the fact that he is half white and half black. But when we’d make the trip to South Central to drop him off for a weekend or pick him up, I would be reminded of just how drastically different every little thing was from our home in Santa Monica. Fortunately, they didn’t have a problem with us; his grandmother loved my wife, Diane. But I imagine that if something happened to Diane, I don’t think they’d be so happy with just me raising him. – Director Mike Binder -[/blockquote]