In 2012, Michael Mann turned back to the big screen with Legendary Pictures to develop Blackhat, a propulsive thriller—a story of one man, a blackhat hacker, trying to outrun his past and take control of his future—set within the brave new world of cyber interconnectedness of all things. As director and producer, Mann brings his signature artistry to weave a compelling film set across an array of exotic Asian locations in the U.S. and Asia, captured with his stunning signature visuals. 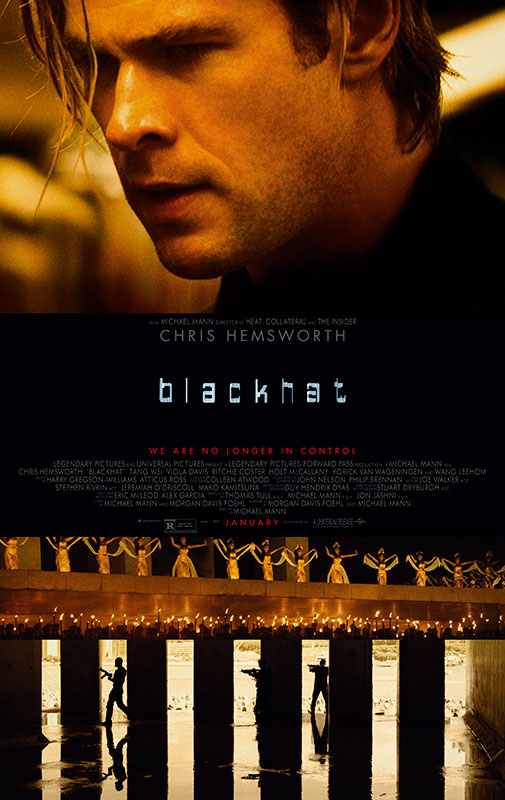 On an oblong plaza at the Irian Jaya Liberation Monument, Mann assembled 3,000 extras in a rich variety of traditional dress—all supervised by three-time Oscar®-winning costume designer Colleen Atwood —below the 65-foot muscular bronze man throwing off the shackles of colonial rule.

Blackhat follows convicted hacker Nicholas Hathaway (CHRIS HEMSWORTH), furloughed from federal prison, and his American and Chinese partners as they try to identify and hunt down a world-class and dangerous cybercrime network from Los Angeles to Hong Kong, Perak, Malaysia and Jakarta. But as Hathaway gets closer to his target, his target becomes aware of Hathaway and the more personal the stakes become. Hemsworth is joined by Academy Award® nominee VIOLA DAVIS as Carol Barrett, an FBI special agent charged with assembling the liaison group to track down the cybercriminal; TANG WEI as Chen Lien.

Mann and Blackhat writer Morgan Davis Foehl began crafting a compelling story that was drawn from the complex and fascinating facts of an activity largely hidden from view. He found that in the cyberrevolution. Mann brought Foehl to Washington, D.C., to meet with Homeland Security agents, former CIA, and FBI agents and others who could give them insight into the processes and hidden world of cybercrime. The insiders’ window provided Mann and Foehl the framework for a timely and propulsive story.

Mann explains how Hemsworth became his Hathaway: “I first saw Chris in Thor, and I thought he was great. Then I talked to Ron Howard, who had worked with him on Rush, and Ron had a great experience and was kind enough  o show me about 45 minutes of the film. Chris was just terrif ic. Then, I really wanted to meet him. So I went down to Costa Rica, where he was vacationing with his family, and we spent about two days together just talking about the film. I decided, at that point, this guy’s it.” To inform the character, Mann introduced Hemsworth to former cybercriminal-turnedconsultant Kevin Poulsen.

Wang Leehom, a American-born Chinese performer, who is a tremendously successful pop star in Asia and lives in Taiwan, explains plays Chen. For the part of the brilliant network engineer Lien, Chen’s sister and the love interest of Hathaway, Mann selected Chinese actress Tang Wei. Blackhat is not only the first Hollywood film for the actress, it was Tang Wei’s first experience on an intense, fast-paced action set.

Brought aboard to play Special Agent Carol Barrett was Oscar® nominee Viola Davis. Like most of us, Davis was admittedly glib about the international threat of cybercrime…until she dug deeper. “It did not scare me going in…but once I delved into it, I was petrified.”

Blackhat is Mann most ambitious production to date: 66 days in 74 locations in four countries, traversing 10,000 miles. It was a production executed on an almost impossibly large scale on locations, some of which had never been host to a production of this size and scope. Principal photography started in Los Angeles. Shooting in Hong Kong, a city home to more than seven million people and 6,000 skyscrapers, began impossibly high up, on the 118th floor of The Ritz-
Carlton Hotel in a bar looking out over the island. The four final days in Southeast Asia’s most populous city were spent on grassy Lapangan Banteng, or Papua Square, shooting one of the film’s most ambitious scenes.