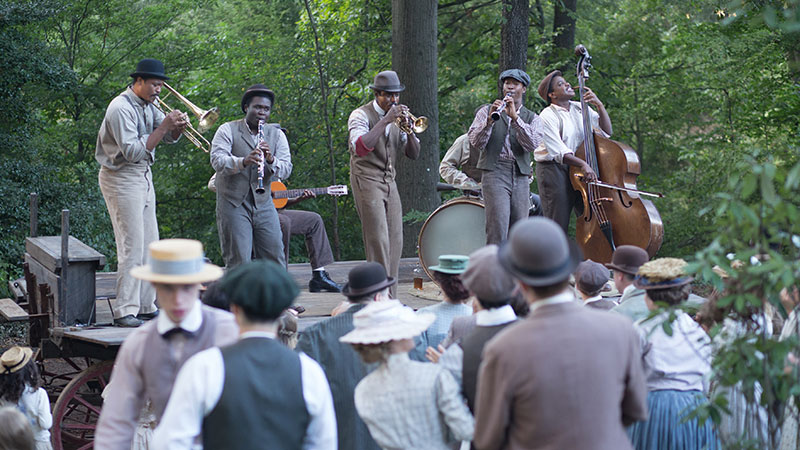 Charles “Buddy” Bolden grew up in New Orleans at the end of 19th century to forge a new kind of music. Fusing blues, ragtime, and gospel with an improvisational urgency anchored by his cornet’s sensual sound, Bolden “invented” jazz, one of America’s few indigenous art forms and its earliest and most important cultural export. 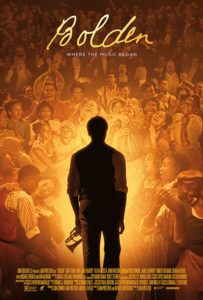 Not many people have heard of Buddy Bolden, but his musical influence has touched each one of us. In director DAN PRITZKER’s captivating and unique drama BOLDEN, this haunted figure is portrayed by GARY CARR both in his prime and in the bleak Louisiana insane asylum where he spent the last 25 years of his life. While Louis Armstrong (RENO WILSON) performs a seminal concert in New Orleans — the first time an African-American musician spoke on the radio — Buddy Bolden’s mind wanders back to New Orleans when he was known as “King Bolden.”

Inspired by the life of Buddy Bolden and told in a dynamically immersive style, the inventive, atmospheric film, from a script by Pritzker and David Rothschild, imagines Bolden’s eventful, tragic life, the social context in which his revolutionary music was conceived, and the resounding influence he had on artists like Louis Armstrong and on the musical form itself.

BOLDEN has been a passion project for director and writer Dan Pritzker for decades. A guitarist for the Chicago-based rock/soul/R&B band Sonia Dada, Pritzker became aware of Bolden’s life story when he was recommended a nonfiction book with a tantalizing description. “I was touring with Sonia Dada, and a friend of mine said he was reading about ‘this guy who invented jazz’ — that got my attention!” Pritzker recalls. “It sounds like a ridiculous concept, like saying someone invented lightning. But Bolden was the shaman who flipped the lights on. Musically, he laid the foundation for what jazz came to be, and for pop culture in America.”

“Don’s book was an invaluable place to start,” says Pritzker. “It was basic history, and there were also passages in it that theorized about moments in Bolden’s life. For instance, Marquis conjectured that Bolden went to a certain school because of the way he wrote the letter B, based on the only signature of his we have, on clarinet player Frank White’s marriage certificate.”

After Pritzker contacted Marquis, the author took Pritzker on a tour of locations crucial to Bolden’s New Orleans, including his home and the sites where he played. Then the filmmaker turned to historian Bruce Raeburn, curator of the Hogan Jazz Archives at Tulane University and Assistant Dean of Libraries for Special Collections, who provided vital biographical information about Bolden as well as sociopolitical and historical context and how it related to Bolden’s music. “Being a musician himself, Dan appreciates American music and how significant it became over the course of the 20th century,” says Raeburn. “He delved into the historical and cultural context of early twentieth century New Orleans, a complicated place where racism and segregation influenced the way people behaved. In neighborhoods like the Treme and Central City sections, where Bolden grew up, there was a new culture just beginning to realize itself. But it begins with a black vernacular sensibility. It’s the emergence of black voices in the American experience. He brought a passion for Bolden, and that was fundamental to what he wanted to bring to the film.”

However, the more Pritzker researched, the more he realized how scant the historical record of Bolden’s actual life was, including, shockingly, his music, which was never officially recorded. “Bolden represents what makes American popular music internationally successful,” says Raeburn — yet no recording of him exists, and Bolden never wrote down his arrangements.

To play Buddy Bolden, Pritzker was initially drawn to British actor Gary Carr because of the actor’s theater experience, sensing that the rigorous training of the stage would allow him to delve into the talent and madness of Bolden in a singularly expressive way. It also helped that Carr — known in the US for HBO’s The Deuce and a product of  British Theatre and TV including Downton Abbey and Death in Paradise — is a trained musician and played a jazz singer on Downton Abbey.

To play Buddy Bolden, Carr discovered freedom in imagination. “There was hardly any information about Bolden,” says Carr. “There was no music for me to reference, not much written or photographic documentation. I had this script and the book In Search of Buddy Bolden, which illustrated what Bolden’s life could have been. However, there was much room for interpretation. It gave me a lot to play with. So, I had the world that he lived in New Orleans, information about the politics of the time and the Jim Crow south, and the way insanity was treated. It was a fascinating opportunity, and a magical kind of challenge.”

While Carr has a background in music, jazz was a different animal, especially Bolden’s groundbreaking style. Another issue: Carr’s instrument of choice was the piano, not a horn.

With music naturally being a crucial part of BOLDEN, the filmmakers knew there needed to be magic on the soundtrack. Enter Wynton Marsalis.  “We knew we needed someone with the musical prowess and deep passion for New Orleans music, so Wynton Marsalis would be our first (and only), choice to join the project,” says producer Jon Cornick.  “I had friends in common with Wynton’s manager, Ed Arrendell, and so I contacted him.  Although Ed was a bit skeptical, he was certainly intrigued and at the end of our conversation, Ed said he would get back to me in a few days.  Ninety minutes later, he called me and said Wynton would like to have dinner with Dan and I in New York in the coming week!  It was a great moment when I called Dan to let him know.”

As Nora — Buddy Bolden’s wife, who, despite her deep love for Buddy, has to contend with his drinking, womanizing and descent into madness — Yaya DaCosta (The Nice Guys, And So It Goes, TV’s Chicago Med, Chicago Fire, and Ugly Betty) connected with the inner fire that Nora found during the difficult times. “Everyone wants something from Buddy. Nora wants to be in a relationship with the man she loves,” she says. The role provided a chance to reflect on the era BOLDEN took place in, and the challenges that African-Americans faced in New Orleans across the nation, then and now. “Being on set in New Orleans, in costume, with all those actors reminded me in a visceral way of what some of my ancestors might have felt,” says DaCosta. “It was beautiful and scary and powerful.  It was such a privilege to be in a film like this.”

Surrounding the actors in sets and costumes that fit the era and the atmosphere was tasked to a production team who knew the perfect notes to hit. Costume designer Colleen Morris, who’s worked on The Marvelous Mrs. Maisel and The Deuce, created a meticulous wardrobe. Morris was uniquely prepared for the job, with expert knowledge of period fabrics and jazz and Buddy Bolden himself. “My dad was a huge Louis Armstrong fan, so of course I knew the name Buddy Bolden, but we never could find anything out about him. When I realized what this film was, it was inspiring. It felt like my participation was meant to be,” Morris explains.

Pritzker employed actual dance choreography to inform another character in the movie: Buddy Bolden as a child, who is seen through the adult Buddy’s addled memory and insanity. To underscore the poetic hallucinatory nature of his childhood recollections, Pritzker staged a gorgeous and surreal series of intercuts, transporting us back to his boyhood with his mother, a seamstress. For those scenes, Pritzker enlisted Tony-winning actor choreographer Hinton Battle (Miss Saigon, Sophisticated Ladies) to design an ethereal dance scene.

Jazz legend Wynton Marsalis, an Executive Producer of BOLDEN and the guiding force behind the music in the film, says that he’s hopeful the film will shed light on Buddy Bolden “So that people can understand another aspect of our history and our culture.”