Burlesque is an American contemporary musical film directed and written by Steve Antin and starring Christina Aguilera and Cher. The film was confirmed to be released on November 24th 2010 in North America. 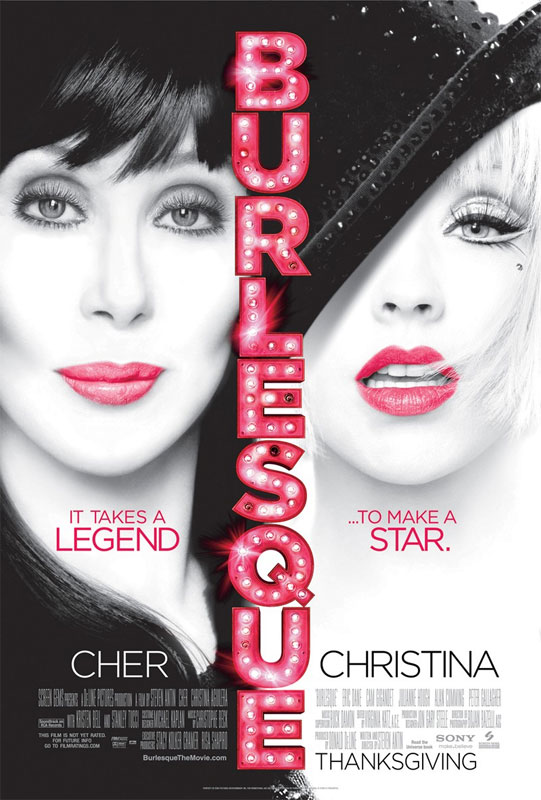 There was a close-up on Christina, and though she had a beautiful look on her face, I knew she had more to give. I went up to her and said, “Christina, this is the moment you’ve been waiting for all your life. Not your character’s life, but yours. It’s now or never.” Moments later I watched her pull years of tears out of those baby blue eyes. Yeah! I know this beautiful child can go as far, and as deep, as she wants to go. I’m proud of her and I am proud to be in this film with her” Cher talking about scenes with Christina.

It was announced that both Cher and Christina Aguilera would contribute to the Soundtrack album with Christina contributing to eight out of the 10 songs with Cher taking the remaining two.

It was confirmed that the album would be released on November 22nd 2010. The lead track ‘Express’ was released to Radio on November 3rd 2010.

Christina Aguilera will make her theatrical film and musical debut as the lead character, a “small-town girl with a big voice,” who finds work at a Los Angeles neo-burlesque club, inspired by Bob Fosse’s Cabaret and European Burlesque entertainment.

Burlesque started shooting on November 9, 2009 and ended on March 3, 2010. Cher is also set to co-star in the film, her first starring role since 2003’s Stuck on you and first musical film. She plays Tess, a former dancer who struggles to keep the nightclub open and serves as a mentor to Christina Aguilera’s character, Ali.