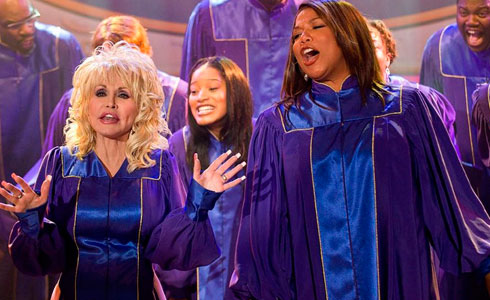 Joyful Noise is a musical film, starring Queen Latifah, Dolly Parton, Keke Palmer, Jeremy Jordan, Courtney B. Vance, Dexter Darden and Kris Kristofferson. It was written and directed by Todd Graff, with gospel-infused music by Mervyn Warren. The film is set to be released in U.S. theaters on January 13, 2012. In the film, two strong-minded women are forced to cooperate when budget cuts threaten to shut down a small-town choir. 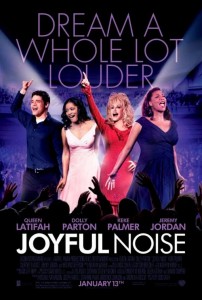 The small town of Pacashau, Georgia, has fallen on hard times, but the people are counting on the Divinity Church Choir to lift their spirits by winning the National Joyful Noise Competition. The choir has always known how to sing in harmony, but the discord between its two leading ladies now threatens to tear them apart. Their newly appointed director, Vi Rose Hill (Latifah), stubbornly wants to stick with their tried-and-true traditional style, while the fiery G.G. Sparrow (Parton) thinks tried-and-true translates to tired-and-old.

Shaking things up even more is the arrival of G.G.’s rebellious grandson, Randy (Jeremy Jordan). Randy has an ear for music, but he also has an eye for Vi Rose’s beautiful and talented daughter, Olivia (Keke Palmer), and the sparks between the two teenagers are causing even more heat between G.G. and Vi Rose.

If these two strong-willed women can overcome their differences and find a common voice, they—and their choir—may make the most joyful noise of all.

The film’s soundtrack, produced and arranged by multi Grammy-winner Mervyn Warren (“Dreamgirls,” “The Preacher’s Wife,” “Sister Act 2″), will be available on January 10.