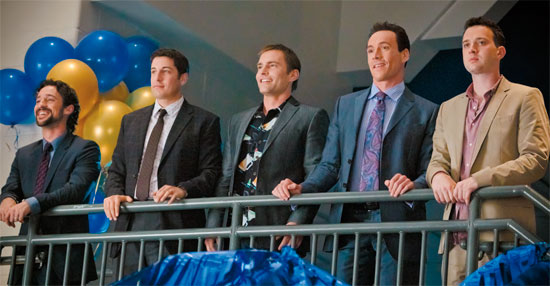 Welcome to the reunion of the Class of 1999 from East Great Falls High. In the comedy American Reunion, all the American Pie characters we met a little more than a decade ago return for their high-school reunion. In one long-overdue weekend, they will discover what has changed, who hasn’t and that time and distance can’t break the bonds of friendship. 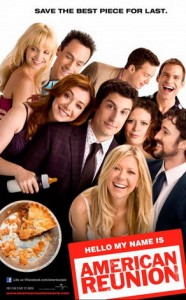 American Reunion (known as American Pie: Reunion in the United Kingdom)is a comedy film written and directed by Jon Hurwitz and Hayden Schlossberg. It is the eighth installment in the American Pie film series and the fourth in the original series of American Pie (1999), American Pie 2 (2001) and American Wedding (2003). The film is scheduled for a theatrical release on April 6, 2012.

Producers Craig Perry, Warren Zide and Chris Moore have been with the American Pie films since day one and were determined to give fans another glimpse into the lives of the characters we have grown to love over the years. “Six years ago, I started coming to Universal every six or nine months to pitch some version of the movie,” says Moore. “Finally, the reunion idea caught on, and with the project greenlit, the challenge was to see if all of the original cast members would be on board.”

The filmmakers agreed that the only way to do justice to East Great Falls was to ensure that the entire group returned for the reunion. Cast member after cast member jumped at the chance to reunite with old friends. “It’s hard to believe that we first met these characters 13 years ago,” notes Zide. “It’s a testament to how beloved they have become that all of our actors returned to revisit these career-defining roles. I’m as excited as the rest of the audience to see them back together again.”

Because the entire original cast wanted to come back, populating the film was easy. Says Hurwitz: “What’s been exciting about the entire cast is that everyone came here motivated to kick ass. They care about their characters, and it was fun getting input from the actors. We were writing it as fans, and we were writing it as filmmakers. But talking to each of these actors to shape the character and where they are now with them has been amazing.” Jason Biggs returns to star as the perpetually horny Jim, and he now tackles the additional role of executive producer. “Jason is unbelievable,” commends Hurwitz. “Every take, he gives you so many different options.