Just how bad can one day get? The creative minds behind Superbad, Pineapple Express and Sausage Party take on sixth grade hard in the outrageous comedy Good Boys. 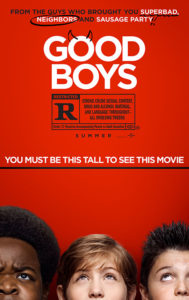 When it came to explaining to the tween stars what sex dolls and adult toys were, the easy way out for anyone on set became “Um…ask your mom.”

Although longtime creative partners Lee Eisenberg and Gene Stupnitsky met while filming Harold Ramis’ Bedazzled, they admit that it feels as if they’ve known one another since they were kids. The instant friends bonded over their shared wicked sense of humor and a mutual love of the turn of a phrase; soon, they’d become roommates and, five years later, professional screenwriters.

When considering the comedy that would propel them from writing team to a filmmaking team, the duo knew they wanted to mine the period of pre-adolescence. “We’re attracted to stories about these years and have believed in Good Boys for a long time,” says Stupnitsky. “There’s no close second; it’s just the most awkward age. We both have close anecdotes about being 12, 13 years old and just trying to make it through our world. That awkwardness lends itself so well to comedy.” Ultimately, mixing innocence with debauchery made them laugh, and they felt that audiences would respond to humor that was equal parts naïvely unintentional and wildly inappropriate. “Especially because these kids are doing things they don’t understand.”

For inspiration, the storytellers discussed Stand by Me, Ferris Bueller’s Day Off, The Hangover and a live-action South Park. “The premise of a comedic coming-of-age story with kids and swearing always seemed like a funny idea,” Eisenberg says. “We felt that the younger the kids, the funnier it would be.” Stupnitsky adds: “The idea of an R-rated movie starring children just made us laugh.”

The team brought their spec script to Nathan Kahane and Brady Fujikawa at Good Universe, who loved the balance between shocking and poignant. The company then took the project to James Weaver, Evan Goldberg and Seth Rogen’s Point Grey Pictures. “Nathan and Brady were excited about the script,” executive producer Josh Fagen says. “We read it and thought it was hilarious. We ultimately decided it was just crazy enough to work, which is the sweet spot for our films.”

From casting and dailies, to developing the script, Rogen and Goldberg were involved throughout production. When the project ended up at Universal, it came together quickly, going into production in less than a year. “From the moment we heard the concept, we were already committed to Point Grey making Good Boys,” says Rogen. “It allowed for a lot of nuanced comedy.” Goldberg was inspired from the moment he read the script. “Good Boys reminded me of a modern version of Stand by Me, which is one of my favorite films,” Goldberg says.

To find the trio of young actors to play the leads in Good Boys, Gene Stupnitsky and Lee Eisenberg turned to casting guru Rich Dellia—who’d cast Point Grey’s The Disaster Artist—for his expertise. “We’d work with Rich again in a heartbeat,” says Stupnitsky. “Between It and Shazam!, he’d already seen every kid in North America. He was just invaluable.”

Shot throughout summer 2018 in and around Vancouver, British Columbia, the production of Good Boys coincided with the young cast’s summer break from school. Point Grey has long lensed there, and the execs found the city and its people to be extraordinarily welcoming to their productions. “Vancouver is one of our favorite places to shoot films,” says producer James Weaver. “The crews are top-notch and incredibly hardworking, as well as just nice people to be around.”