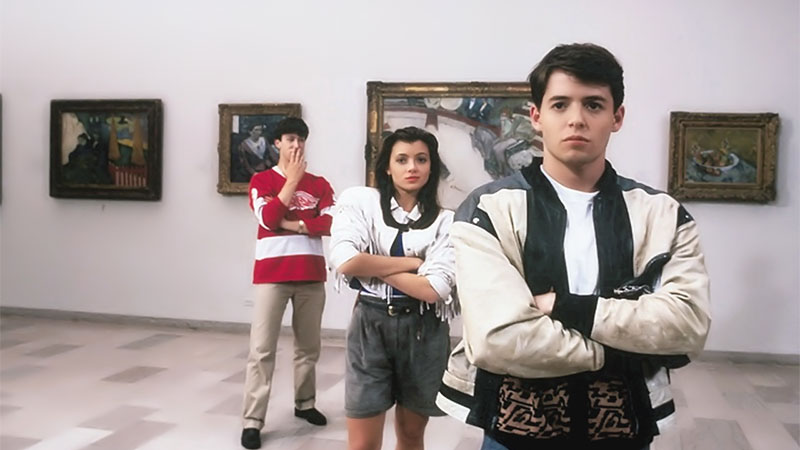 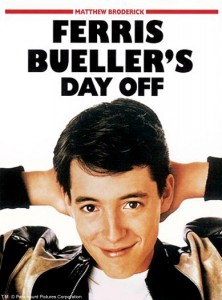 The film follows high school senior Ferris Bueller (Matthew Broderick), who decides to skip school and spend the day in downtown Chicago. Accompanied by his girlfriend Sloane Peterson (Mia Sara) and his best friend Cameron Frye (Alan Ruck), he creatively avoids his school’s Dean of Students Edward Rooney (Jeffrey Jones), his resentful sister Jeanie (Jennifer Grey), and his parents. During the film, Bueller frequently breaks the fourth wall by speaking directly to the camera to explain to the audience his techniques and thoughts.

Hughes wrote the screenplay in less than a week and shot the film – on a budget of $6 million – over several months in late 1985. Featuring many famous Chicago landmarks including the then Sears Tower and the Art Institute of Chicago, the film was Hughes’ love letter to the city: “I really wanted to capture as much of Chicago as I could. Not just in the architecture and landscape, but the spirit.”

Released by Paramount Pictures on June 11, 1986, Ferris Bueller’s Day Off became one of the top grossing films of the year and was enthusiastically received by critics and audiences alike.

John Hughes said that he had Broderick in mind when he wrote the screenplay for the film, saying Broderick was the only actor he could think of who could pull the role off, calling him clever, smart and charming. “Certain guys would have played Ferris and you would have thought, ‘Where’s my wallet?‘” Hughes said. “I had to have that look; that charm had to come through. Jimmy Stewart could have played Ferris at 15…I needed Matthew.”

Mia Sara surprised John Hughes when she auditioned for the role of Sloane Peterson. “It was funny. He didn’t know how old I was and said he wanted an older girl to play the 17-year-old. He said it would take someone older to give her the kind of dignity she needed. He almost fell out of his chair when I told him I was only 18.” Molly Ringwald had also wanted to play Sloane, but according to Ringwald, “John wouldn’t let me do it: he said that the part wasn’t big enough for me.”

Then First Lady Barbara Bush paraphrased Ferris in her 1990 commencement address at Wellesley College: “Find the joy in life, because as Ferris Bueller said on his day off, ‘Life moves pretty fast; if you don’t stop and look around once in a while, you could miss it!‘” Responding to the audience’s enthusiastic applause, she added “I’m not going to tell George ya clapped more for Ferris than ya clapped for George.”

Other phrases from Ferris Bueller’s Day Off such as Ben Stein’s nasally voiced “Bueller? …Bueller? …Bueller?” (when attempting to take roll call in class) and “Anyone? Anyone?” (trying to probe the students for answers) as well as Kristy Swanson’s cheerful “No problem whatsoever!” also permeated popular culture. Stein’s monotone performance actually launched his acting career.

Broderick said of the Ferris Bueller role, “It eclipsed everything, I should admit, and to some degree it still does.” Later at the 2010 Oscar tribute to Hughes, he said, “For the past 25 years, nearly every day someone comes up to me, taps me on the shoulder and says, ‘Hey, Ferris, is this your day off?‘” Lyman Ward and Cindy Pickett, who play the parents, met on the set in 1986 and were married a short time after that. The two again played parents in the 1992 horror film Sleepwalkers. A parody of the film titled Fearless Buller’s Day Off was published in Mad Magazine. It was illustrated by Mort Drucker and written by Dennis Snee in regular issue #268, January 1987.