Academy Award-nominee Guillermo del Toro presents Mama, a supernatural thriller that tells the haunting tale of two little girls who disappeared into the woods the day their parents were killed. When they are rescued years later and begin a new life, they find that someone or something wants to come tuck them in at night. 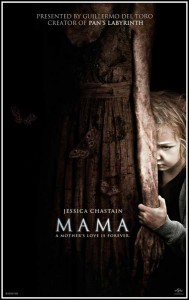 Guillermo Del Toro describes his attraction to translating Mamá into a feature film: “In the first 10 seconds of the short film, it was clear that Andy Muschietti really understood drama, and I was very impressed. Andy is the real deal.”

The behind-the-scenes team is led by producer J. Miles Dales, who produces the film alongside Barbara Muschietti.  Del Toro serves as executive producer of the film.

Based on their acclaimed short that took the film community by storm in 2008, Mama is the first feature crafted by international commercial director Andy Muschietti and his sister, producer Barbara Muschietti.

Over the course of just one day in 2006, the Spanish natives made their short as an exercise in style and to show that Andy was capable of creating dark material in addition to his humorous commercials.  In the film, we are introduced to two young girls, Victoria and Lilly, as they are trapped in their house and terrified of something or someone.  We follow them as they try to escape a spectral creature only known as “Mamá,” running from one end of their house to the other…until they find themselves trapped at the end of a hallway and with nowhere to hide.

The short grabbed the attention of Guillermo del Toro, the prolific writer/director/producer who has produced close to 20 movies, many by first-time directors.  He watches hundreds of short films each year and tries to give words of encouragement to burgeoning filmmakers as they transition to bigger projects.  Once in a while, he finds something truly special.  That was indeed the case when del Toro’s then assistant showed him the Muschiettis’ work.

For the critical roles of the feral girls left in the woods for five years, 10-year-old Megan Charpentier was cast as Victoria and eight-year-old Isabelle Nélisse was brought on board as her little sister, Lilly.  As both girls are in the majority of the scenes of the thriller, the filmmakers knew the search to cast them would not be a simple one.