Captain America: The First Avenger is an American superhero film based on the Marvel Comics character Captain America. The film stars Chris Evans as Captain America with Joe Johnston directing a script by David Self, Christopher Markus, Stephen McFeely, and Joss Whedon. The film will be part of the Marvel Cinematic Universe and is scheduled to be released in 3D. 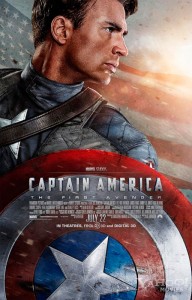 In Captain America: The First Avenger, after being deemed unfit for military service, Steve Rogers volunteers for a top secret research project that turns him into Captain America, a superhero dedicated to defending America’s ideals.

In 1942, Steve Rogers (Chris Evans) is deemed physically unfit to enlist in the U.S. Army and fight the Nazis in World War II. Volunteering instead for Project: Rebirth, a secret military operation, he is physically transformed into a super-soldier dubbed Captain America. With sidekick Bucky Barnes (Sebastian Stan), he fights the Red Skull (Hugo Weaving), Hitler’s treacherous head of advanced weaponry, whose own plan for world domination involves a seemingly magical object known as the Tesseract.

In April 1997, Marvel was in negotiations with Mark Gordon and Gary Levinsohn to produce Captain America. In addition Larry Wilson and Leslie Bohem were set to write a script. In May 2000, Marvel teamed with Artisan Entertainment to help finance the film. However, a lawsuit arose between Marvel Comics and Joe Simon over the ownership of Captain America copyrights, disrupting the development process of the film. The lawsuit was eventually settled in September 2003. In 2005, Marvel received a $525 million investment from Merrill Lynch, allowing them to independently produce ten films, including Captain America. Paramount Pictures agreed to distribute the film.

Originally, the film would stand alone; producer Kevin Feige said “about half” the movie would be set during World War II before moving into the modern day. Producer Avi Arad said, “The biggest opportunity with Captain America is as a man ‘out of time’, coming back today, looking at our world through the eyes of someone who thought the perfect world was small-town United States. Sixty years go by, and who are we today? Are we better?” He cited the Back to the Future trilogy as an influence, and claimed he had “someone in mind to be the star, and definitely someone in mind to be the director”. In February 2006, Arad hoped to have a summer 2008 theatrical release date. Jon Favreau approached Arad to direct the film as a comedy, but he chose to make Iron Man instead. In July 2006, David Self was hired to write the script. He explained Captain America was his favorite superhero as a child because “my dad told me I could one day be Captain America”. Michael France was also interested. Joe Johnston met with Marvel to discuss directing the film.

In December 2009, director Joe Johnston indicated he planned to start filming in April 2010. In a separate interview that month, he described the film’s pre-production: “Rick Heinrichs is production-designing and we’re set up down in Manhattan Beach[, California]. … We have eight or ten really talented artists, and we all just sit around all day and draw pictures and say, ‘Hey, wouldn’t it be cool if we could do this?’ It’s that phase of the production where money doesn’t matter: ‘Let’s put all the greatest stuff up on the wall and [then later] see what we can afford.'” The film, he said, will begin “in 1942, 1943” during World War II. “The stuff in the ’60s and ’70s [comic books] we’re sort of avoiding. We’re going back to the ’40s, and then forward to what they’re doing with Captain America now.” Johnston confirmed that the Red Skull would be the film’s primary antagonist. In February 2010, he stated that the World War II-era super team the Invaders will appear in “the entire second half” of the film, though in November he shot down speculation that the Sub-Mariner, an Invaders team-member in the comics, would be included.

Variety reported in March 2010, that Chris Evans was cast as Captain America, and Hugo Weaving as the Red Skull. In April, Sebastian Stan, who had been mentioned in media accounts as a possibility to play the title role of Captain America, was cast as Bucky Barnes. Stan is contracted for multiple films. Also in April it was announced that Hayley Atwell had been cast as Captain America’s girlfriend Peggy Carter as well as the changing of the film’s name from The First Avenger: Captain America to Captain America: The First Avenger. The next day it was reported that Joss Whedon would be re-writing the script for Joe Johnston’s Captain America: The First Avenger as part of his negotiation to write and direct The Avengers. However the extent of Whedon’s polish on Christopher Markus and Stephen McFeely’s script remained unknown. Whedon later clarified in an August interview that “I just got to make some character connections. The structure of the thing was really tight and I loved it, but there were a couple of opportunities to find his voice a little bit — and some of the other characters — and make the connections so that you understood exactly why he wanted to be who he wanted to be. And progressing through the script to flesh it out a little bit”. Samuel L. Jackson revealed in an interview that he will reprise his role as Nick Fury in the film. Kevin Fiege later confirmed that Fury’s elite special unit of US Army Rangers, the Howling Commandos would also appear.

In May, Marvel Studios confirmed Hugo Weaving will play the Red Skull. Toby Jones entered final negotiations to play Arnim Zola. Iron Man director Jon Favreau said a younger Howard Stark would appear in the film, played by Dominic Cooper. Hayley Atwell revealed that Tommy Lee Jones will have a role in the film. By June, Neal McDonough was in talks to play Dum Dum Dugan. Four days later, McDonough confirmed he was taking the part. On the same day, Stanley Tucci joined the cast as Dr. Abraham Erskine, the scientist who created the Super Soldier Serum.

Production began on June 28, 2010. The same day, Marvel confirmed that actor Tommy Lee Jones had been cast to play US Army Colonel Chester Phillips. The next day Marvel confirmed Dominic Cooper will portray the younger version of Howard Stark, the character played by John Slattery in Iron Man 2. The film was announced to shoot in London, England, in late July, and was expected to include scenes featuring key London landmarks. War scenes were scheduled to be filmed in September in the Welsh village of Caerwent. Filming was also scheduled to take place that month in the Northern Quarter of Manchester, UK, where parts of the 2004 film Alfie and the 2009 Sherlock Holmes had been shot, followed by Liverpool’s Stanley Dock area, both doubling for the period’s Lower East Side of Manhattan, New York City. Scenes were also scheduled to be shot in Liverpool’s Albert Dock.

In June 2010, the official logo for Captain America: The First Avenger surfaced on the Internet. Early footage of the film was shown at the 2010 San Diego Comic-Con International with director Joe Johnston admitting that they just started filming four days prior to presenting it at San Diego’s convention center. The first television advertisement aired during Super Bowl XLV on the Fox network in the United States. Paramount reportedly paid three million dollars to run the thirty second ad. In January 2011 it was reported that Captain America: The First Avenger would be released simply as The First Avenger in Russia, Ukraine and South Korea due to political sensitivities. The first full trailer was released in March 2011.

In July 2010, Marvel Studios head Kevin Feige said that both this film and Thor would be released in 3-D. Johnston did a one-day test shooting with a 3-D rig, as opposed to shooting in 2-D and converting, and found it “a nightmare” due to bulky gear, calibration issues and restricted filmmaking options. Regardless, he said he believes 3-D is “a new challenge and it’s exciting”. Producer Kevin Feige insisted that the conversion would not compromise the films image quality, as the decision to release the film in 3-D was made early in development, and that “an unprecedented amount of time” would be devoted to the conversion process, with all the films visual effects being rendered in true 3-D.