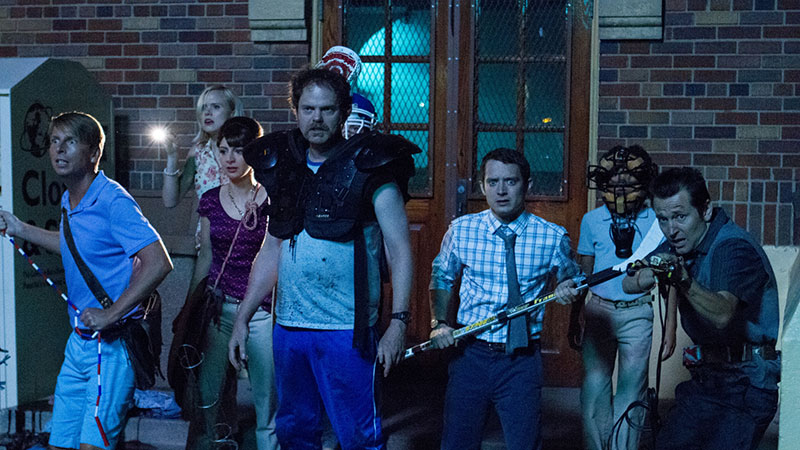 Cooties is a horror comedy with unexpected laughs and unapologetic thrills. When a cafeteria food virus turns elementary school children into little killer savages, a group of misfit teachers must band together to escape the playground carnage. 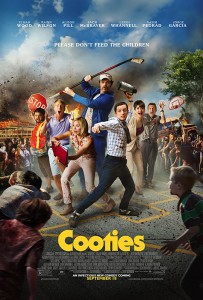 Despite the constraints of a 25-day shooting schedule, directing team Jonathan Milott and Cary Murnion encouraged their cast to go off script and ad lib lines of dialogue when the occasion called for it.

The germ of the idea for a film called Cooties came to producer Josh C. Waller while chatting with his young niece about imaginary schoolyard contagion. The conversation immediately inspired Waller to picture a horror scenario in which an industrial-strength “cooties” epidemic turns pre-pubescent children into feral predators. Waller shared his concept with his SpectreVision producing partners Daniel Noah and Elijah Wood.

To develop their premise into a full-blown screenplay, Waller, Noah and Wood recruited horror auteur Leigh Whannell. Responsible for co-writing the first three Saw movies and writing the blockbuster Insidious franchise, Whannell loved the Cooties title but insisted on bringing humor into the mix. “Originally we wanted Cooties to be a straight-up hardcore horror film,” says Noah. But Whannell recalls that when the producers presented him with their ideas, his response was, “Guys…it’s called Cooties!”

To crank up the story’s joke quotient, Whannell brought on his friend Ian Brennan to co-write the screenplay. Brennan had no experience in the horror genre but plenty of practice writing about teachers and students as co-creator of the hit high-school musical TV series “Glee.”

Once Whannell and Brennan delivered their Cooties script, SpectreVision invited several directors to pitch their takes on the material. Though they’d never made a feature film before, directing team Jonathan Milott and Cary Murnion, known collectively as HONEST, won over the producers by spending two months creating a “lookbook” complete with storyboards, a video, and a chart showing how the virus would affect kids at various stages. Impressed with HONEST’s presentation, SpectreVision embraced the idea of a two-person directing team.

With the script and directors in place, SpectreVision began casting actors to portray the quirky faculty members held captive by their cooties-infested pupils. One of the first actors to respond to the Cooties challenge was Rainn Wilson. Best known for his portrayal of Assistant to the Regional Manager Dwight Schrute on the long-running NBC comedy series “The Office,” Wilson portrays bitter gym teacher Wade Johnson.

Wood, famed for his portrayal of Frodo in the blockbuster Lord of the Rings trilogy, had no intention of starring as the unlikely hero of Cooties, but his producing partners had other ideas. “Every time we made a cast list, we came to the conclusion that Elijah was the only actor who could play Clint,” says Waller. “Elijah is charming and endearing and he fought right up until the last minute about joining the cast.”  Ultimately, Wood enjoyed wearing two hats as both actor and producer.

Cooties began principal photography in July 2013 at Los Angeles’s Dorris Place Elementary School. Filmed largely at this single location, cast and crew enjoyed the luxury of shooting most of the movie in sequence.