Insidious is a 2011 American independent  supernatural horror film written by Leigh Whannell, directed by James Wan, and starring Patrick Wilson, Rose Byrne, Lin Shaye, and Barbara Hershey. The story centers on a couple whose son inexplicably enters a comatose state and becomes a vessel for ghosts in an astral dimension. The film was released in theaters on April 1, 2011. The film has been nominated for 10 awards. 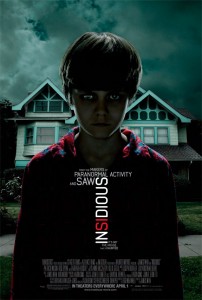 Josh (Patrick Wilson) and Renai (Rose Byrne) have a happy family with their three young children. When tragedy strikes their young son, Josh and Renai begin to experience things that science cannot explain.

Insidious has received generally positive reviews. Review aggregate Rotten Tomatoes reports that 68% of critics have given the film a positive review based on 157 reviews, with an average score of 6.0. The critical consensus is: “Aside from a shaky final act, Insidious is a very scary and very fun haunted house thrill ride.” Roger Ebert gave the film 2 1/2 stars out of 4 saying, “It depends on characters, atmosphere, sneaky happenings and mounting dread. This one is not terrifically good, but moviegoers will get what they’re expecting.”

Steve O’ Brien from WCBS-FM says ” Most Terrifying Film since The Exorcist“.

A number of negative reviews reported that the second half of the film did not match the development of the first. Mike Hale of The New York Times wrote that “the strongest analogue for the second half of Insidious is one that the filmmakers probably weren’t trying for: it feels like a less poetic version of an M. Night Shyamalan fairy tale.” Similarly, James Berardinelli commented, “if there’s a complaint to be made about Insidious, it’s that the film’s second half is unable to live up to the impossibly high standards set by the first half.” Ethan Gilsdorf of The Boston Globe wrote that “[t]he film begins with promise” but “[t]he crazy train of Insidious runs fully off the rails when the filmmakers go logical and some of the strange gets explained away as a double shot of demonic possession and astral projection.”

Insidious is an Alliance Films Presentation, in Association With IM Global, of a Haunted Movies Production.