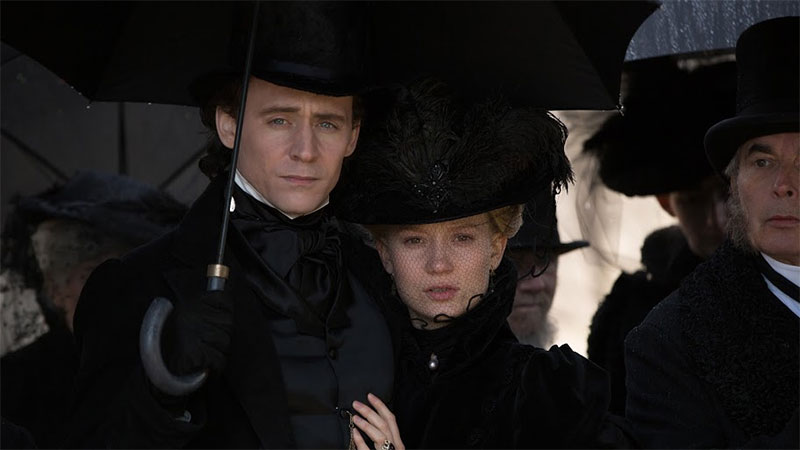 When her heart is stolen by a seductive stranger, a young woman is swept away to a house atop a mountain of blood-red clay: a place filled with secrets that will haunt her forever. Between desire and darkness, between mystery and madness, lies the truth behind Crimson Peak. 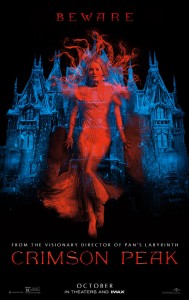 The layered delicate silks of the costume were intended to aid actress Mia Wasikowska’s performance in its movement.

Del Toro always begins his casting process with a shortlist of actors with whom he wants to work.  Fortunately for Crimson Peak, Charlie Hunnam, Jim Beaver and Jessica Chastain were on the top of that list. In fact, del Toro had planted a seed for future collaboration with Hunnam while they were still working on Pacific Rim.

Shortly after they wrapped Pacific Rim, Hunnam received an email from the director asking him to look over the script and consider the role of Dr. McMichael, one of 20th century Buffalo’s most dashing young bachelors. Hunnam appreciated that the production was such a narrative-driven one, and quite enjoyed that del Toro was getting back to his earlier roots. He reflects: “Crimson Peak is similar to the vein of Pan’s Labyrinth, Cronos and The Devil’s Backbone—all the great work that Guillermo  has done in Spanish.”

Jim Beaver was thrilled when he got the call to join del Toro’s latest production. Beaver admits that he’s not a big fan of contemporary horror movies and welcomed the chance to work on a film that makes the audience question the very things they trust in the real world. The actor offers that del Toro brings sophistication to his work.

For the female leads, the director wanted two actresses who mirrored one another as light and darkness, butterfly and moth. Both the protagonist and antagonist are strong women fighting for survival and ultimately love. Jessica Chastain and Mia Wasikowska fit the roles perfectly. Del Toro had met Chastain while producing the supernatural thriller Mama, in which she played the lead role.

The haunted house that is Allerdale Hall is perhaps the most important element of the film and acts as a vessel for the storyline. It is the story’s most fearful character, oozing red clay from beneath the earth. No existing structure could satisfy del Toro’s vivid imagination. Where other Hollywood productions would have turned to computer technology, creating an edifice filled with fears and terrors, the director decided to build a magnificent set of days gone by. Building the haunted house required teams of set designers, builders and decorators to work in tandem for nearly six months in order for everything to be completed in time for the shoot. Naturally, designing to facilitate the work of cinematographer Dan Lausten was a key part of every conversation.

Twelve weeks before pre-production began, production designer Sanders arrived in Toronto with a 20-foot trailer, ready to create a shop and build models. Sanders’ process is unique; no one in the industry builds models of his scope.

Finding practical locations was another logistical challenge that required not only period appropriate interiors, but also the flexibility to transform them to suit the style of the film. One of these was Victoria College in Toronto. Art director Brandt Gordon, had night crews working 14-hour shifts for weeks to prep and paint the locations. Once the school opened again they could only return on the weekends. In other cases the difficulties were created by nature.