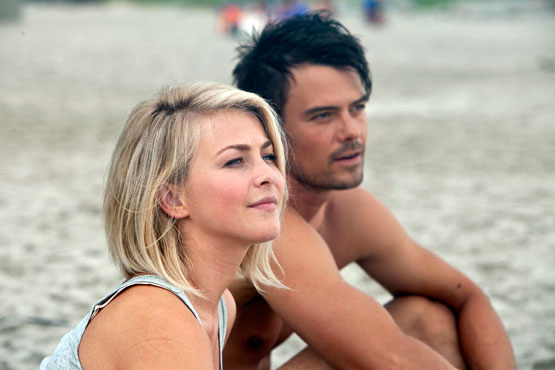 A mysterious young woman arrives in a small North Carolina town and reluctantly finds new love with a lonely widower in Safe Haven, a deeply moving romantic thriller from Nicholas Sparks, the best-selling author whose novels inspired the beloved films The Notebook and Dear John. 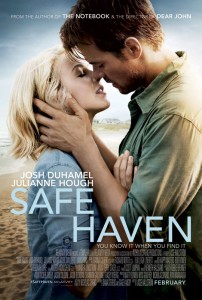 Katie Feldman (Julianne Hough) arrives in the tiny coastal town of Southport, North Carolina, looking to make a new, quiet life for herself. She rents a rundown cabin and takes a job waiting on tables in the local café, hoping to keep a low profile. But despite the almost impenetrable emotional walls she has built to protect herself, she is drawn in by the genuine warmth and caring of the tight-knit community, especially the town’s grocery-store owner, Alex (Josh Duhamel), and his two young children.

The film is directed by Lasse Hallström. The screenplay is by Dana Stevens based on the novel by Nicholas Sparks. Producers are Marty Bowen, Wyck Godfrey and Ryan Kavanaugh.

Safe Haven marks the beginning of a new chapter in author Nicholas Sparks’ already extraordinary career, which encompasses more than a dozen bestselling novels and a string of hit movie adaptations including Message in a Bottle, A Walk to Remember, The Notebook, Nights in Rodanthe, Dear John and The Lucky One. The story’s North Carolina setting and exquisitely wrought romance are classic Sparks, but this time the author has added an element of mystery and action to the mix, producing a tense thriller wrapped around a tender love story.

“It’s something a little unexpected,” Sparks says. “There are a lot of elements in the film that are new as far as a Nicholas Sparks film goes. Of course, fans will still get the relatable characters and the strong love story that they come to my work looking for. There’s a lot of chemistry between the main characters and the relationship evolves in a very natural way. But there are a couple of other threads that are different. It feels like Nicholas Sparks, until it suddenly doesn’t.”