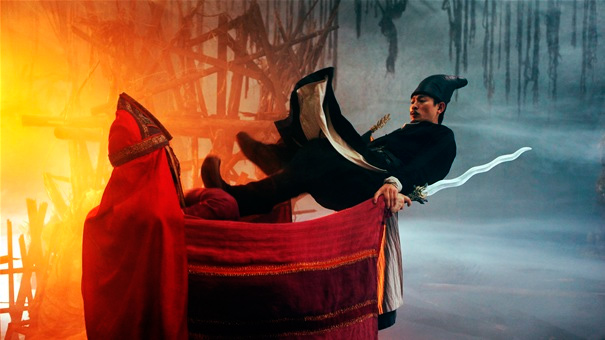 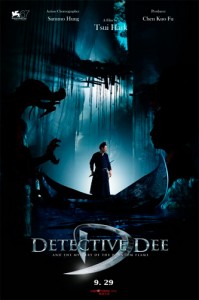 Whenever possible, the costumes in Detective Dee are faithfully inspired by archaeological discoveries of Tang Dynasty artifacts, including exquisite surviving tricolor pottery and murals and manuscripts preserved in the caves at Dunhuang

On the eve of her coronation as Empress (Carina Lau, 2046), China’s most powerful woman is haunted by a chilling murder mystery: seven men under her command have burst into flames, leaving behind only black ash and skeletal bones.

Recognizing this threat to her power, she turns to the infamous Dee Renjie (Andy Lau, Infernal Affairs, House Of Flying Daggers): a man whose unparalleled wisdom is matched only by his martial arts skills. As he battles a series of bizarre dangers, he unveils a chilling truth that places his life, and the future of an entire dynasty, in peril.

Detective Dee is not just a household name among Chinese audiences; he also captured the imagination of generations of Western authors. Dee was a real historical figure born in 630, the son of a scholar official, who died in 700 as a minister of state.

There are detailed biographical notes of Dee’s illustrious later career as a high official in the “Old History of the Tang Dynasty” (Jiu Tangshu) published in 945 and in the “New History of the Tang Dynasty” (Xin Tangshu) published in 1060. However, little is known about his earlier career as a district magistrate, a period that most captured the imagination.

The character of Shangguan Jing’er, or Jing, is loosely based on the historical figure Shangguan Wan’er, a legendary female poet and politician who served Empress Wu. However, in “Detective Dee and the Mystery of the Phantom Flame”, Jing is also highly skilled in martial arts. Eight years before, when she was 12-years-old, her policeman father was killed on duty. Adopted by the Empress, she has grown into a beautiful and deadly woman.

The personality of each character in the film is reflected in the choice of weapon that he or she carries. There are a wide variety of weapons used in the film, many of a foreign design — for example, Japanese and Arabic — that serve to indicate the cosmopolitan nature of the city but also hint at the martial arts mastery of their owners.

A key location in the film is the Forbidden Pavilion, which is the domain of the Royal Sorcerer, the only suspect who is officially off limits to Detective Dee.