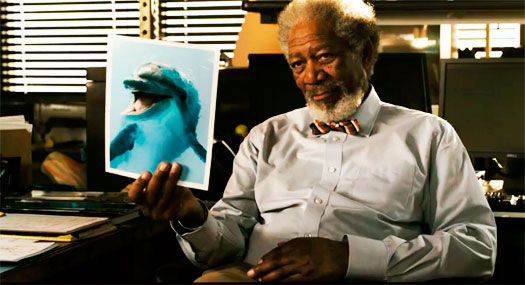 Dolphin Tale is a drama film directed by Charles Martin Smith from a screenplay by Karen Janszen and starring the Oscar® winner Morgan Freeman (“Million Dollar Baby”) as Dr. Ken McCarthy, who is given the seemingly impossible task of crafting a new prosthetic tail for Winter; Harry Connick, Jr. as Dr. Clay Haskett, who runs the Clearwater Marine Hospital; Ashley Judd as Lorraine, a single mother; Nathan Gamble as her son, Sawyer, who frees Winter from the trap and forms an instant connection with the dolphin; Cozi Zuehlsdorff as Hazel, Clay’s daughter, who befriends Sawyer; and Kris Kristofferson as Clay’s father, Reed. 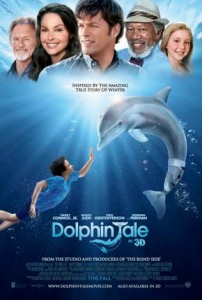 Clearwater Marine Aquarium embarked upon a $12 Million campaign June 10 to expand the current facility, before the release of Dolphin Tale

“Dolphin Tale” was directed by Charles Martin Smith from a screenplay by Karen Janszen & Noam Dromi. The film is produced by Alcon Entertainment’s Broderick Johnson and Andrew A. Kosove (Oscar® nominees for “The Blind Side”) and Richard Ingber. Robert Engelman and Steven P. Wegner served as executive producers.

“Dolphin Tale” was filmed on location in Florida, including Winter’s home at the Clearwater Marine Aquarium, whose motto is “Rescue, Rehabilitate and Return.”

The film is inspired by the true story of a bottlenose dolphin named Winter who was rescued off the Florida coast and taken in by the Clearwater Marine Aquarium.

The movie is set for release on September 23, 2011 in North America by Warner Bros. Pictures. The film will also be released in 3D.

The real Winter, who plays herself in “Dolphin Tale,” today serves as a symbol of courage, perseverance and hope for millions of people around the world  —both able and disabled—who have been touched by her remarkable story of recovery and rehabilitation.