Eye in the Sky stars Helen Mirren as Colonel Katherine Powell, a UK-based military officer in command of a top-secret drone operation to capture terrorists in Kenya. Through remote surveillance and on-the-ground intel, Powell discovers the targets are planning a suicide bombing and the mission escalates from “capture” to “kill.” But as American pilot Steve Watts (Aaron Paul) is about to engage, a nine-year old girl enters the kill zone, triggering an international dispute reaching the highest levels of US and British government over the moral, political, and personal implications of modern warfare. 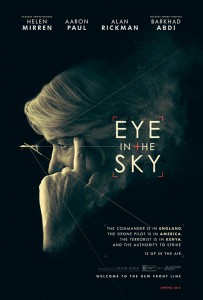 To make sure Eye in the Sky offered an authentic portrayal of modern warfare, the filmmakers enlisted former Royal Artillery Officer Chris Lincoln Jones to serve as the project’s military expert. A 25-year veteran of the British military, Major Jones vetted Hibbert’s script and advised the filmmakers on everything from the characters’ backstories to military jargon to Uniforms.

Long before a headline-making American drone attack destroyed an Afghan hospital in October 2015, British writer Guy Hibbert penned a remarkably prescient script about the slippery moral slope enabled by unmanned military aircraft. That was in 2008 and he then spent four frustrating years trying to get it made. But when Hibbert met producer Ged Doherty at a party in 2012 and told him about the screenplay, Doherty was immediately hooked on the story’s dramatic potential. “Guy gave me the pitch which I instantly loved, and that same night he sent me the script,” recalls Doherty, a former music executive who now runs the Raindog Films production company with actor Colin Firth.

Firth was also taken with the screenplay, but it was the following year before the pair decided to move forward with the project. Raindog sealed its deal with Hibbert in the summer of 2013, spurred by breaking news. “In July of that year, President Obama admitted for the first time that the U.S. had also killed civilians in drone attacks around the world, as previously the administration had said it had only ever killed terrorists in these attacks” Doherty says.

In late 2013, Doherty was introduced to South African-born director Gavin Hood, “I was immediately drawn to Eye in the Sky because it’s an incredibly contemporary exploration of the way we wage war now,” says Hood.

As the script made the rounds in Hollywood, a number of other acclaimed filmmakers also began circling the project. “People were going after this wonderful piece of material because it’s not just actors — directors have to audition too,” Hood explains. Known for his meticulous pre-production process, Hood spent a month putting together a multi-media presentation, then pitched his vision for Eye in the Sky to the producers in November 2013.

Determined to land the project, Hood left no room for error. “They laughed at me when I showed up with my big old computer because I didn’t want to take a chance that their equipment would break down,” he recalls. “I always spend a lot of time putting together mood boards and visual references, so I’d collected all these images, photographs, articles and video references to give shape and color to the story. I took all of that to my first meeting and they seemed to like what I showed them.”

One of Hood’s key creative decisions was casting Academy Award winner Helen Mirren (The Queen) as Colonel Katherine Powell. Mirren, whose wide-ranging career has encompassed three additional Academy Award-nominated performances and a recent turn as gossip columnist Hedda Hopper in Trumbo, had never played a soldier. “In the circumstances we see in Eye in the Sky, legal questions are very much part of the process,” she says. “These people don’t want legal issues to come back and bite them in the ass a year later and find they’re being accused of war crimes.”

Coming off of his three-time Emmy®-winning performance on the hit AMC series “Breaking Bad,” Aaron Paul assumes the role of Las Vegas-based drone pilot Steve Watts. “When I learned the controls, my spine started to hurt a little bit because it’s so nerve-wracking. It felt so strange that my character was in Las Vegas controlling a drone halfway around the world in Kenya. As I dove deeper into the character, I almost felt like it was really happening.”

Alan Rickman, who has played such iconic villains as Professor Severus Snape in the Harry Potter films and Die Hard terror mastermind Hans Gruber, takes on the role of General Benson, Colonel Powell’s commanding officer. In real life, the veteran British actor says he was never cut out for a military career.

While Benson enjoys the luxury of viewing terrorist activity from a 4,200-mile remove, Nairobi spy Jama Farah, played by Barkhad Abdi, puts his own life in jeopardy when he positions himself just a few hundred feet from the enemy. Abdi, who fled to Minneapolis from war-torn Somalia at the age of six, says returning to Africa to shoot Eye in the Sky was as a reminder of the perils of technology-driven combat.

Although Eye in the Sky’s tale of digital-age warfare spans four continents, the entire movie was actually filmed in and around the visually versatile location of Cape Town, South Africa. “The reason we chose Cape Town is that we were able to replicate Singapore, Las Vegas, Hawaii, Central London, Sussex — where Colonel Powell lives — and of course Nairobi, where the terrorists’ safe house is located,” explains producer Ged Doherty.