For Colored Girls is an American film directed, produced, and written by Tyler Perry. It is an adaptation of Ntozake Shange’s 1975 stage play For Colored Girls Who Have Considered Suicide When the Rainbow Is Enuf. 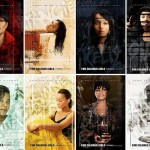 A review by Shadow and Act was favorable, calling For Colored Girls “the best thing Perry has done to date.” The film is said to be a dramatic improvement from his earlier work. Perry is complimented on his cinematography, and use of “subtlety and nuance”, although his screenwriting is still considered to be the weakest aspect of the film.

Retaining the play’s poetic style, the film’s lead cast consists of eight African-American women, seven of whom are based on the play’s seven characters only known by color (“Lady in Red”, “Lady in Blue”, “Lady in Yellow” etc). Like its source material, each character deals with a different personal conflict, such as love, abandonment, rape, infidelity, and abortion.

On September 3, 2009, Lionsgate announced it had acquired the distribution rights Tyler Perry‘s 34th Street Films adaptation of the play, with principal photography originally scheduled to take place in Atlanta, Georgia in November and December 2009, with a planned 2010 release.

The film will be written, directed, and produced by Perry. The cast includes Loretta Devine, Kimberly Elise, Whoopi Goldberg, Janet Jackson, Phylicia Rashad, Anika Noni Rose, Kerry Washington and Thandie Newton. Mariah Carey had also been cast, but pulled out in May 2010, citing medical reasons; Thandie Newton has been cast to replace her. Macy Gray has also been cast.

Originally titled For Colored Girls Who Have Considered Suicide When the Rainbow is Enuf, the film’s title was shortened to For Colored Girls in September 2010. In an October 2010 press conference with the cast, Perry credited his full body of work for being able to make the film, stating, “It took everything – Madea, House Of Payne and all of that for me to be able to do For Colored Girls. Had none of that happened I wouldn’t have been able to say, “Listen, this is what I want to do next,” so I’m very proud of it all.”