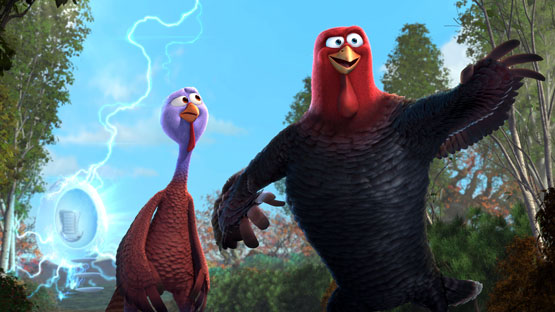 From Relativity Media and Reel FX Animation Studios comes an animated comedy adventure for audiences of all ages – Free Birds. The first theatrical fulllength computer-animated film to be made at award-winning Reel FX in Dallas, Texas, Free Birds is the story of two turkeys from opposite sides of the tracks who must put aside their differences and travel back in time to change the course of history – and get turkey off the Thanksgiving menu for good. 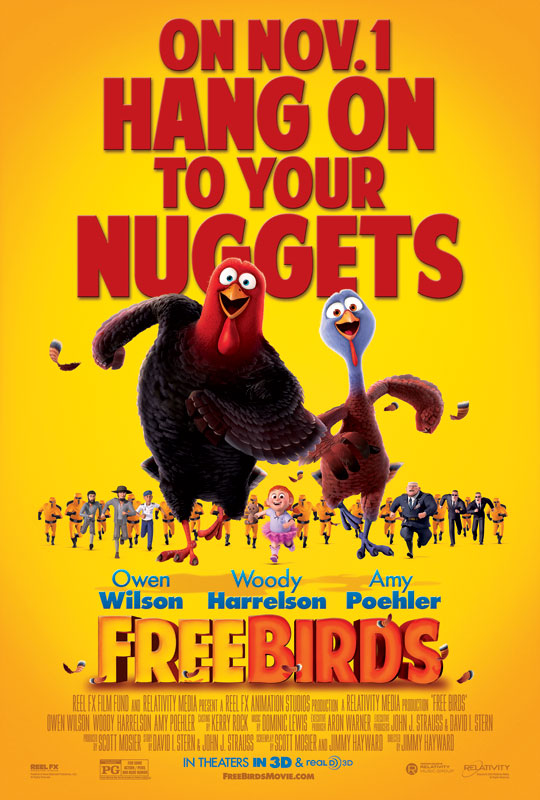 Actors doing voice work for animated films typically record individually in the studio. But writer/director Jimmy Hayward takes it one step further: he plays all the other characters around the featured actor. “That way I can control the flow and maintain the energy of the scene,” he explains.

The making of Free Birds all began with an original idea from screenwriters David I. Stern and John J. Strauss. “The initial premise for the film at that time was, ‘Two turkeys go back in time to the first Thanksgiving and try to take themselves off the menu,’” says Stern. Stern and Strauss felt they had something unique and exciting on their hands, and after spending six months developing the idea, they flew to Dallas in the fall of 2008 to pitch the concept to executives at Reel FX.

Free Birds continues the comic tradition of the buddy comedy, featuring two incompatible heroes – in this case two turkeys: brainy, self-serving Reggie and dim-witted, heroic Jake – thrown into a rollicking, and ultimately life-changing, adventure. “We wanted Free Birds, at its heart, to convey the meaning of friendship, loyalty, and ultimately what it means to ‘do the right thing,’” says Strauss.

Pre-production work at Reel FX began in 2009, but it wasn’t until the spring of 2011 that writer/director Jimmy Hayward, came aboard to push the project into production. Hayward was joined by writer/producer Scott Mosier and Academy Award®-winning executive producer Aron Warner (the Shrek franchise). “As soon as Jimmy, Scott and Aron came aboard, the movie just shot off like a cannon,” says David Ross, President of Reel FX.

Finding the right voices for an entire flock turkeys, a sassy time machine, contemporary government officials and pilgrims in 1621 was no simple task, but the filmmakers knew casting was crucial to the film’s benefit. Owen Wilson and Woody Harrelson came aboard Free Birds early in the process due to longstanding friendships with several Reel FX executives, who are fellow Texans.

“With Free Birds being a buddy movie, we immediately thought that Owen and Woody would be the ideal pair to play Reggie and Jake. When we pitched the original premise to them, they agreed to do it immediately,” recalls David Ross, President of Reel FX.