Friends with Kids is an independent American ensemble comedy that is written, produced, directed by and also starring Jennifer Westfeldt. Her partner Jon Hamm also stars in the movie, along with Kristen Wiig, Adam Scott, and Megan Fox. Shooting began in 2010 in New York. 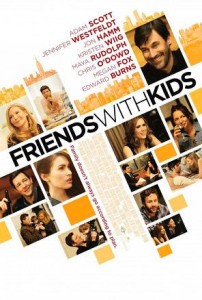 Friends with Kids is directed, written, produced and also starring Jennifer Westfeldt. This will be her directorial debut.

JASON (Adam Scott) and JULIE (Jennifer Westfeldt) are single thirty-something Manhattanites. They’ve been best friends since college, they live in the same building, trust each other implicitly – and aren’t remotely attracted to each other. As the film opens, they meet at a chic downtown restaurant for a dinner with their closest friends, two married couples: LESLIE and ALEX (Maya Rudolph and Chris O’ Dowd), funny and frank — and BEN and MISSY (Jon Hamm and Kristen Wiig), such a sexy pair that they are in fact having a quickie in the restaurant bathroom when Julie and Jason arrive.

Fast forward to FOUR YEARS LATER – and everything has changed.

Leslie and Alex have two kids, Missy and Ben have a newborn – and Jason and Julie, still single and childless, find themselves taking a long expensive cab ride to Alex and Leslie’s apartment in Brooklyn – on Jason’s birthday. They have brought the wine, the food, the cake, Julie has brought the only birthday gift for Jason – and when they arrive, the mood is not remotely festive. Their friends are sniping at each other, harried and utterly consumed by the demands of parenting.

Is this what happens when you have kids? Julie and Jason riff on whether you can maintain true romance in your life – and also have children. Is it possible? Jason offhandedly suggests that maybe they should have a kid together and beat the system – be with their kid half the time, and pursue unfettered, uncomplicated romance the other half. It’s a funny joke… or is it? Julie and Jason have their baby – JOE – and all is well. They are the most competent, functional, loving pair of unmarried, unattached parents one could hope to see (much to their friends’ chagrin), and they both start to date. Jason meets MARYJANE (Megan Fox), a lithe Broadway dancer who is Jason’s physical ideal and Leslie introduces Julie to KURT (Edward Burns), dashing, tall, impossibly kind – and recently divorced, with two kids of his own.

Have Julie and Jason beat the system?

Nothing proves as simple as they’d hoped. Their friends – who can’t help feeling they are part of the system Julie and Jason have set out to “beat” – are threatened by their friends’ choice and how well it seems to be working. And Julie, even as she gets more and more deeply involved with Kurt, finds herself falling hard for Jason – despite the fact that she’s thought of him as a brother for nearly two decades.

Having kids proves to be the crucible through which all of these friends’ lives are forever changed – in sweeping and surprising ways. There is great comedy and enormous feeling in this story about discovering the love of your life in the way you were least expecting.

Jennifer started her career as a New York-based theater actress, starring in more than 25 Off-Broadway and regional productions, including the long-running hit The Fantasticks. In 2003, she made her Broadway debut in the critical and commercial hit Wonderful Town, directed by two-time Tony winner Kathleen Marshall, co-starring opposite two-time Tony Award winner Donna Murphy. Jennifer received a 2004 Tony nomination for her performance, a Theater World Award for Outstanding Broadway Debut, and a Drama League Award. Her most recent stage work includes the world premiere of Cusi Cram’s A Lifetime Burning at Primary Stages, the world premiere of Joe Gilford’s Finks at New York Stage & Film, and Three Sisters for L.A. Theaterworks.

Principal photography for Friends with Kids lasted for four weeks, beginning in New York during December 2010 and carrying out into early 2011. With a budget of less than US$10 million, Friends with Kids was made through Westfeldt and Hamm’s new production company, Points West Pictures, and a large portion of it was financed by Red Granite Pictures. The latter had never previously financed a movie. The film premiered at the 2011 Toronto International Film Festival on September 9, 2011. On September 21, 2011, Lionsgate announced that it had acquired the distribution rights to the film with a release date of March 9th, 2012.