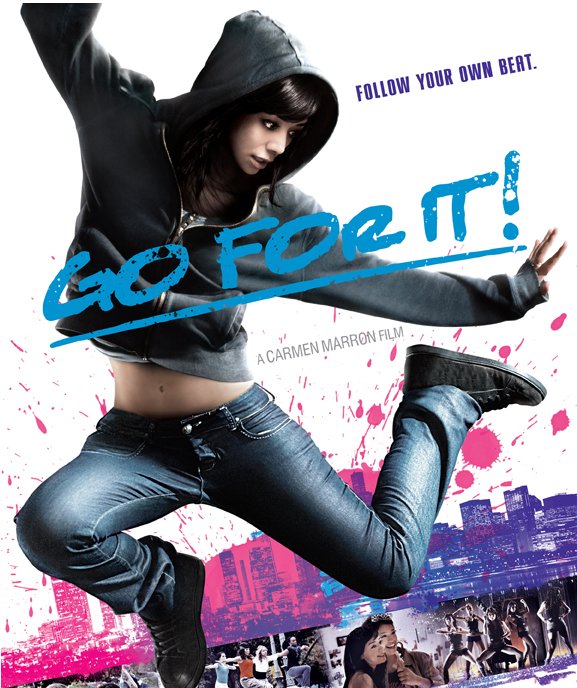 GO FOR IT! is an inspirational dance (hip-hop) drama directed by Carmen Marron. Starring: Aimee Garcia, Al Bandiero, Jossara Jinaro. The film got a PG-13 rating due to sexual content, language, brief violence and drug material.

Go for it! follows Carmen, a 19 yr. old girl living in Chicago, who struggles to overcome her fears and follow her dream to be a dancer.

Carmen is 19 year old student who is trying to find her identity, raised in the inner-city of Chicago. She spends most of her time in underground clubs enthralled with her true passion in life, dance. She proves herself to the tough streets of Chicago as she follows her own beat. Born a first generation Mexican-American she is faced with what her parents expect and what her heart is demanding.

Afraid to believe in herself Carmen is put to the test, when she is challenged by her professor to audition for a formal dance school in California. She is torn between a chaotic family, love interest and her best friend’s abusive relationship. Can Carmen overcome life’s obstacles and take the biggest chance of her life or will she fall victim to self-sabotage?

Carmen Marron, the filmmaker, is the founder of Sparkhope Productions, a company dedicated to creating films that bring awareness to women’s issues and support cultural diversity in relationships. She created “GO FOR IT!” inspired by her experiences as a street dancer growing up in Chicago and hopes to inspire urban youth to believe in their inner-strength and follow their dreams.

Carmen began her filmmaking aspirations in Arizona while a guidance counselor for high-risk elementary school children in South Phoenix. It was then that Carmen began writing the screenplay, “GO FOR IT!” as a response to the disparity in role models for minorities and their reverence for violence on TV and in film. “GO FOR IT!” represents the reality of socio-economically disadvantaged youth and addresses the societal issues they face while integrating the cool underground world of street dance.

Pantelion presents in association with Lionsgate and Sparkhope Productions a GO FOR IT! LLC production, a Carmen Marron film. Written, produced and directed by Carmen Marron and starring Aimee Garcia.