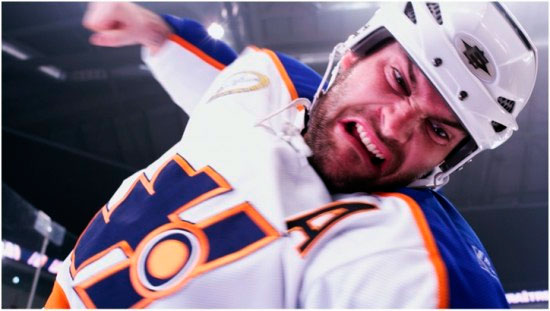 Hockey – it’s a Canadian as donuts which is why producer David Gross couldn’t help but feel frustration that the quintessential movie about the sport, Slapshot, was made by someone other than a Canadian. And damn it, David Gross was going to do something about it.

Together with producer Jesse Shapira, Gross found screenwriter Evan Goldberg (Pineapple Express, Superbad, The Simpsons) and asked him if he’d like to write a Canadian hockey movie. Turns out that being an expat Canadian, Goldberg had been chomping at the bit to do something about the old country. He liked the idea. He was excited about the idea. He wanted to write the screenplay. There was just one problem – he knew nothing about hockey (a fact that could lose him his citizenship, but we won’t go there right now). So he turned to actor/writer Jay Baruchel.

Now Baruchel is a different story. He’d been weaned on hockey and his time spent in the California sun hadn’t leached that out of his sub-zero Montreal-winter blood. “All of my knowledge or interest in hockey comes from my father,” he said. “I was raised in a household where the Montreal Canadians were effectively our religion: Jewish on Dad’s side, Catholic on Mum’s, all Habs fans. And Dad’s favorite players were always the tough ones, the enforcers – or the goons for lack of a better term: Chris “Knuckles” Nilan, John “Rambo” Kordic, Larry “Big Bird” Robinson, friggin’ Lyle Odelein.”

Baruchel met with Goldberg, Gross and Shapira and everything fell into place. “It was almost five years ago when we finished the first draft,” he said. Writing the script was a bi-coastal process – Goldberg in LA, Baruchel in Montreal. They tweaked it back and forth via email. “Then we brought some other really talented writers into the writers’ room: Kyle Hunter, Ariel Shaffir and my writing partner, Jesse Chabot.” This was teamwork, through and through.

GOON is inspired by the book, Goon: The True Story of an Unlikely Journey and starring Seann William Scottand Liev Schreiber.

Into a Minor Hockey League, about Doug Smith, a late bloomer, who didn’t start playing hockey until age 19 and came equipped with the unlikely skill of an amateur boxer. No one in the Goon camp remembers who found the book first. Best guess is it was Jesse Shapira.

Mike “The Captain” Dowse is a director with hockey in his DNA. “I was a Flames fan first because I’m originally from Calgary. When I moved to Montreal, it took me four years to switch over to being a Habs fan, but having a kid helped me get into it. I also started playing hockey again for the first time since I was fourteen. When you get right down to it, I love hockey.“