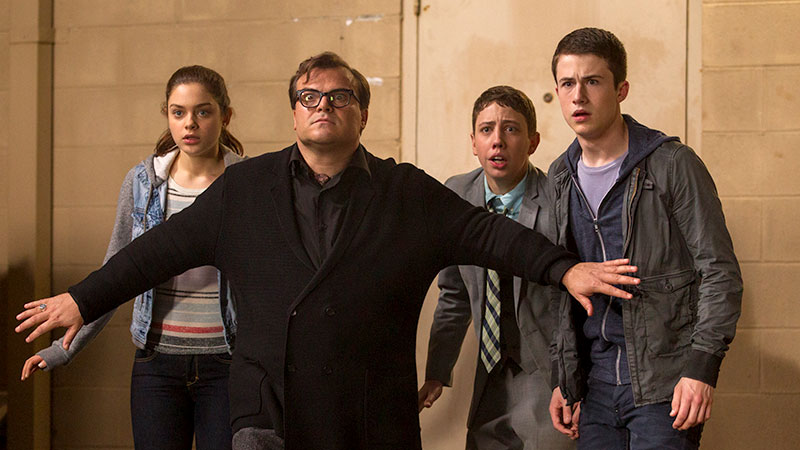 In Goosebumps, teenager Zach Cooper (Dylan Minnette), upset about moving from a big city to a small town, finds a silver lining when he meets the beautiful girl, Hannah (Odeya Rush), living right next door, and makes a quick friend in Champ (Ryan Lee).  But every silver lining has a cloud, and Zach’s comes when he learns that Hannah’s mysterious dad is in fact R.L. Stine (Jack Black), the author of the bestselling Goosebumps series. As Zach starts learning about the strange family next door, he soon discovers that Stine holds a dangerous secret: the creatures that his stories made famous are real, and Stine protects his readers by keeping them locked up in their books. 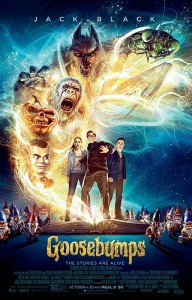 The Ghouls were well versed in zombie movement, as many of them had previously worked as zombies on the television show “The Walking Dead.” and the actor inside the Bog Monster suit was 6’8” tall and wore a size fifteen shoe. Fun Goosebumps trivia: the Bog Monster and the Snake Lady were boyfriend and girlfriend in real life.

Initially, the filmmakers – including director Rob Letterman,  producer Deborah Forte, and producer Neal H. Moritz – faced a dilemma: with nearly 200 different Goosebumps books to choose from, which book to adapt? The answer came as the filmmakers cracked the code: they would put dozens of Stine’s most famous creations into one film, with Stine himself at the center.

That true essence of the books required threading the needle on the tone that struck a chord, over and over again, in hundreds of books. “The books are scary, but not too scary; they’re fun, but not over-the-top,” says Moritz. “We wanted a story that kids could relate to, and have fun with Jack Black playing R.L. Stine. Jack has a quality that makes everyone comfortable.”

Opposite Black, the filmmakers cast so many of Stine’s famous creations. Whenever possible, the filmmakers created a practical creature out of make-up and special effects. “Any monsters that we could do practically, we did,” says Rob Letterman.

Leading the way as the chief villain is Stine’s most lasting creation: Slappy the Dummy. In the film, Slappy is Stine’s alter ego and the mastermind behind the evil plot. The filmmakers reached out to Ironhead Studio to design and create a real, working ventriloquist’s dummy – one that resembles Jack Black in many ways. The dummy was entirely manual – no electronics at all – and puppeted by Avery Lee Jones, who got the job after a nationwide audition.

Teaming up with Jack Black in the film is a trio of young up-and-coming actors: Dylan Minnette as Zach, Odeya Rush as Hannah, and Ryan Lee as Champ. Because the four team up in the film to re-capture the creatures, it was imperative that the actors could not only handle their roles, but share a chemistry that would pop off the screen. As a result, Letterman not only met with the actors solo, but brought them in to read with each other, and, as a final confirmation, with Jack Black, to make sure the dynamic would work.

Shooting continued at the Decatur Cemetery for the Ghoul ambush, and then ventured to Jonesboro, where the family run grocery store chain, Wayfield Foods, was used during the late night hours for the Werewolf chase sequence. The Abominable Snowman chase sequence was filmed at the Ice Forum ice rink in Marietta.