Gulliver’s Travels is a live-action family-comedy adventure film directed by Rob Letterman and based on the 18th-century novel of the same name by Jonathan Swift, though the film takes place in the modern era. 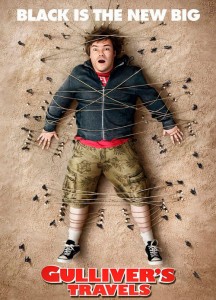 The film stars Jack Black as the title character Lemuel Gulliver with Catherine Tate as Queen of Lilliput and is distributed by 20th Century Fox. In a January 2010 interview on The Late Late Show with Craig Ferguson, Segel explained his character spends most of the movie in Black’s shirt pocket.

Gulliver’s Travels, which was written in 1726, remains one of the classic works of English literature. The author used his tall tales to satirize the society of his day in a manner that can be somewhat confusing to the modern reader unacquainted with the vagaries of life at the court of George I. It remains to be seen how much of the spirit of the original novel Hollywood will use: previous adaptations have taken severe liberties with the source material and tended to excise much of the satire.

The plot of the movie, according to Hollywood, centers on Lemuel Gulliver (Jack Black), a free-spirited travel writer who, on an assignment to the Bermuda Triangle, suddenly finds himself a giant among men when he washes ashore on the hidden island of Lilliput, home to a population of industrious, yet tiny, people.

The feature is preceded by an Ice Age animation short called ‘The World According to Scrat’, featuring a furry creature chasing after an acorn.  This contains some fantastical comic action scenes.