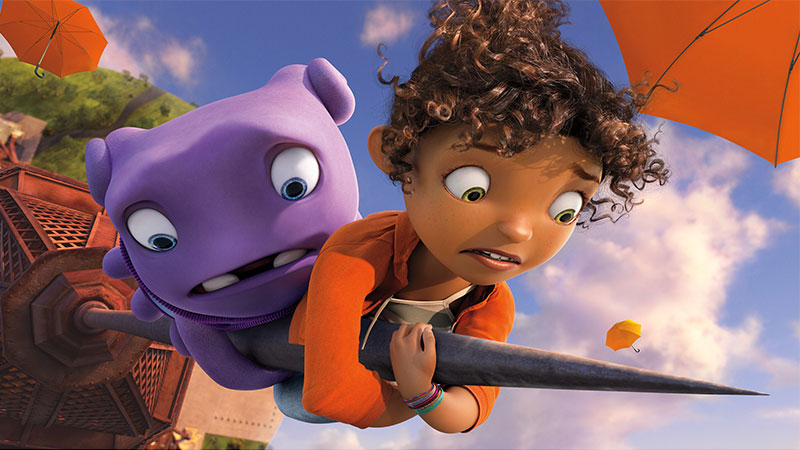 When Oh, a lovable misfit from another planet, lands on Earth and finds himself on the run from his own people, he forms an unlikely friendship with an adventurous girl named Tip who is on a quest of her own. Through a series of comic adventures with Tip, Oh comes to understand that being different and making mistakes is all part of being human, and together they discover the true meaning of the word HOME.

HOME’s production design is an intriguing mix of the familiar and the unearthly. Among the Boov’s signature features are roly-poly frames, assertive and bright-eyed faces, six little legs – and “nostricles,” which look like tentacles situated where we’d expect their ears to be.

Welcome to what HOME director Tim Johnson calls the first “post-apocalyptic, alien invasion buddy comedy, road trip, animated movie.” But above all, says Johnson, HOME is about two characters who don’t fit in their respective worlds, but together find the true meaning of acceptance and ever-surprising commonalities.

Bringing HOME to the big screen began in Tim Johnson’s …home, when he began reading author Adam Rex’s novel The True Meaning of Smekday to his young sons, then ages five and seven. With Rex’s support, Johnson, screenwriters Tom J. Astle & Matt Ember, and producers Mireille Soria and Suzanne Buirgy, worked to bring the story and characters to life on film, sometimes expanding upon themes and situations from the book, but always remaining true to its spirit.

Jim Parsons who voices Oh, makes his animated feature debut in HOME. The classically trained actor embraced the challenges of working in the genre. “It’s the most interesting ‘playtime’ I’ve ever had as an actor,” he explains.  Johnson had been a fan of Parsons’ work for several years, and their collaboration deepened his respect for the actor’s prodigious talents. “Jim’s voice is musical and that’s the most important thing you look for in casting an animated feature,” the director explains.

Rihanna also makes her animated feature debut as the voice of Tip. And like Parsons, she enjoyed the experience, finding much to explore with the character.  Further, the music icon identified with her onscreen alter ego. “Tip definitely reminds me of myself,” she says. “That’s really why I did HOME. I understand the way Tip thinks, as well as her flaws, ambition, sass and attitude.”

The singer’s celebrated vocal talents made a big impact during their sessions together. “Recording Rihanna, you literally have to stand back when you tell her to yell…wow, I mean, this is someone who fills arenas with her voice,” adds Johnson. “She is that powerful.”

Comic legend Steve Martin voices the ever-confident (and with no good reason) Smek, and notes that “the fact that a coward like Smek is the supreme head of the Boov points to their naiveté.” Like most voice actors, Martin did most of the recording sessions minus his co-stars. But he was impressed by how little this impacted his performance.

Music plays a big role in shaping HOME’s humor, characterizations and themes – no surprise, given Rihanna’s involvement with the project. In addition to essaying Tip and contributing key songs, the pop sensation was very involved in shaping the film’s entire soundtrack, which weaves songs from her and other contemporary artists, including Kiesza, Charli XCX + Stargate, and Ester Dean, into the traditional film score.

Since Tim Johnson directed DreamWorks Animation’s Antz in 1998, animation technology has made quantum leaps – due largely to the company’s innovations.

DreamWorks Animation embarked on creating an entirely new technology to be used in the design of its films. HOME is the second film, following How to Train Your Dragon 2, to fully employ the company’s new proprietary platform, Apollo. Five years in the making, Apollo allows artists to control and manipulate data in an effortless and intuitive way, creating an end result that is visually richer and greater in scope for the audience.