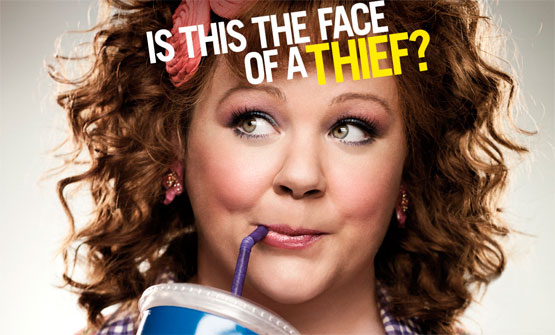 Jason Bateman and Melissa McCarthy pair up to lead the cast of Identity Thief, an all-star comedy in which a regular guy is forced to extreme measures to clear his name.  With everything to lose after his identity is stolen, he’ll find out how crazed you can get trying to settle a bad credit score. 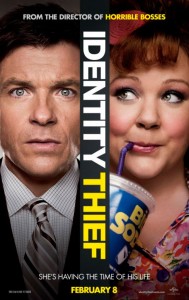 While a majority of Identity Thief takes place during Sandy and Diana’s epic road trip from Winter Park, Florida, to Denver, Colorado, the crew shot the lion’s share of the production in Atlanta, Georgia

Directed by Seth Gordon, Identity Thief is produced by the team of Scott Stuber, Jason Bateman and Pamela Abdy.  The comedy’s screenplay is written by Craig Mazin, from a story by Jerry Eeten and Mazin.

Joining Bateman and McCarthy for the outrageous comedy are co-stars Jon Favreau as Harold Cornish, Sandy’s pompous and egocentric boss at Prominence Financial; Amanda Peet as Trish, Sandy’s extremely patient wife and mother of their two young girls; Tip ‘T.I.’ Harris and Genesis Rodriguez Rodriguez as Julian and Marisol, a pair of ruthless bounty hunters hot on Diana and Sandy’s trail; Jonathan Banks as Paul, the crime boss to whom Julian and Marisol report; Morris Chestnut as Reilly, the Denver police detective whose hands are tied when it comes to clearing Sandy’s name; John Cho as Daniel Casey, Sandy’s co-worker at Prominence who stages a coup at their office; Robert Patrick as the skiptracer who will stop at nothing to bring Diana back to his very unforgiving employer; and Eric Stonestreet as Big Chuck, Diana’s one-night paramour (and the bane of Sandy’s existence) on the open road.

“A friend of mine, Peter Morgan, who’s a producer, brought me this script,” recalls Bateman.  “It contained this easy, self-contained concept of one guy who steals another guy’s identity and the victim has nothing better to do than to find the man who did it, put him in a car and make him undo it all.  So it set itself up in a format of two of my favorite movies, Planes, Trains and Automobiles and Midnight Run.”

With a working story and many ideas for the film percolating, Bateman pitched the idea to producer Scott Stuber while they were shooting Couples Retreat on Bora Bora.  For Stuber, reteaming with Bateman for Identity Thief would prove an easy decision to make.  “Jason and I were in the midst of our third movie together, and he came to me with this great comedy, which I immediately liked,” recalls Stuber.

McCarthy was flattered that the team rewrote the part for her strengths and sensibilities.  The actress offers: “What also made the project interesting was that we were starting from the ground up with the character and we could give Diana depth and layers.  I thought if someone’s stealing, you never want to make that character completely evil because it would be one-dimensional and boring.  I loved the thought of her being so on the outside of everything in her life that the reason she steals and gets into people’s credit histories is to be a voyeur.  She sees what trips they go on or their family pictures or that someone has bought an engagement ring and is about to get married.  It’s all the steps in life that she is not able to take, so it is less about her stealing and acquiring things as it is feeling like she is part of these people’s lives.”