In the Land of Blood and Honey is a film marking a directorial debut of actress Angelina Jolie. Her first feature film set during the Bosnian War, shows Danijel, a soldier fighting for the Serbs, re-encounters Ajla, a Bosnian who’s now a captive in his camp he oversees. Their once promising connection has become ambiguous as their motives have changed. 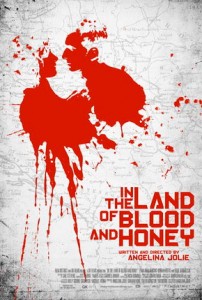 The R-rated drama was shot in October 2010 and starred local actors as had been announced in advance. Angelina Jolie casted (by and large) Bosnian locals, including many people who were actually children during the country’s civil war in the ’90s. In the Land of Blood and Honey was also shot in two versions – one in English, the other in Serbo-Croatian respectively Bosnian/Croatian/Serbian (BCS) – so that (presumably) U.S. moviegoers will end up watching a cut that does not require them to read subtitles (or the film’s cast to be dubbed).

While filming Angelina Jolie was asked for the reason why she had picked such a demanding and delicate topic for her debut as a filmmaker. She responded she had felt a necessity to rekindle attention for the survivors of a war that took place in recent history Due to her awareness of looming difficulties she had acknowledged the necessity to realize the film by herself.

Unfortunately the shooting was overshadowed by protests because concerned war victims and their speakers resented Jolie’s endeavor. When it was falsely reported that the story was about a female Bosniak war victim having a complicated love affair with a Serbian war criminal, Bosnian women were appalled and subsequently tried to hinder Angelina Jolie making this film.