OutKast’s André Benjamin stars as Jimi Hendrix in this revealing biopic from Academy Award-winning writer-director John Ridley (“12 Years A Slave”). Covering a year in Hendrix’s life from 1966-67 as an unknown backup guitarist playing New York’s Cheetah Club to making his mark in London’s music scene up until his Monterey Pop triumph, the film presents an intimate portrait of the sensitive young musician on the verge of becoming a rock legend. 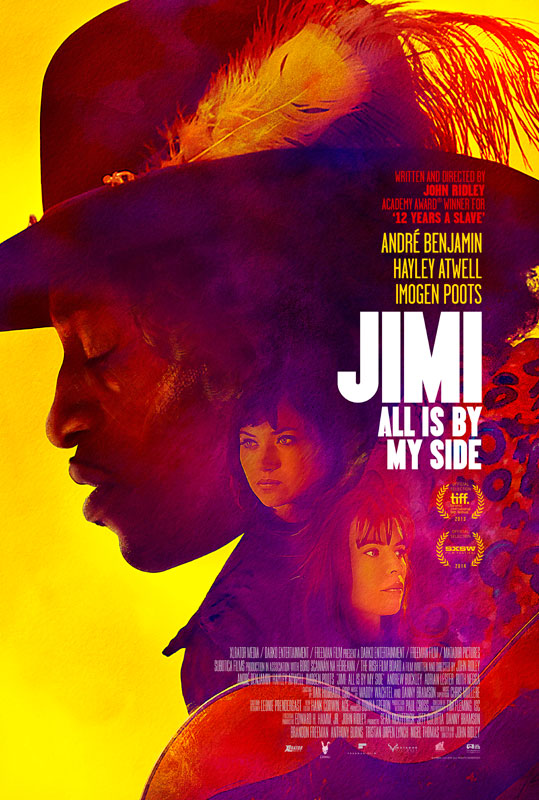 Chief among Ridley’s concerns was staying true to the spirit of Hendrix as a man. In many people’s eyes he has been reduced to an image on a t-shirt; an icon, a pop culture cliché. But as well as a mind-blowing guitarist, he was a unique individual with a fascinating journey.

When the producers at Darko Entertainment received the script, they knew this was not a project of expediency. Rather, it would take time, care, and extensive research, to tell the story of Hendrix’s pre-fame period in London. “We received the script three years before production began,” explains Sean McKittrick, producer at Darko Entertainment. “There wasn’t really a development period. It was more a research period about how we go about making this movie. How much money we needed to make it properly. Who we would work with. Where we should work. What kind of crew we needed. We meticulously figured out the best way to approach this.”

Described by writer-director John Ridley as one of the most rarely told stories in rock history, JIMI: ALL IS BY MY SIDE charts just over a year in a man’s life. The year he blossomed and became Jimi Hendrix. The year he spent as a young musician trying to make it on the streets and in the clubs of London, England. The lovers, friends, and musical collaborators, who helped him get there.

From the beginning, it was always going to be André Benjamin. John Ridley insisted that it was André when he first brought the project to Darko. Benjamin had long admired Hendrix. This influence fed into the work of OutKast, the Atlanta-based hip hop duo Benjamin fronted with Antwan “Big Boi” Patton. “OutKast’s Bombs over Baghdad video was totally influenced by Hendrix,” says Benjamin. “Even the guitar solo in it.” Hendrix was left-handed, so Benjamin had to learn how to play the guitar left-handed, or at least maintain the illusion he was playing left-handed.

As the research unfolded, John Ridley and the producers at Darko Entertainment scouted for locations. Ridley and McKittrick had visited London when producer Nigel Thomas of Matador Pictures suggested Dublin, Ireland as an alternative. Tristan Orpen Lynch, of Irish production company Subotica, met the team in Los Angeles in 2011. In November that year, the filmmakers visited Dublin. “We realized Dublin is easier to shoot than the London of 1966/1967,” says Lynch. “Everything went really quickly after that. In this part of the world, when someone makes a plan to shoot a film it usually takes a year for it to come together. This came together in a few months.”

Cast and crew enjoyed working in Dublin. Ruth Negga (who plays Ida) is Irish, but the majority of her work is outside the country. “It was strange,” says Negga. “I’ve made TV shows in Ireland but I’ve never made a film here. It’s lovely being in Dublin because it’s so much smaller than London. It’s easier to maneuver. We were staying at the Shelbourne Hotel and you’d get home and you’d have Dublin on your doorstep to do whatever you wanted. You’d go for a walk in the park. In the evening, André went out exploring Dublin.”

The costume department played a crucial role in JIMI: ALL IS BY MY SIDE. Hendrix is known for his outrageous dress sense, but in the early stages of his career he wore a plain trench coat. His famous coat was a British Royal Veterinary jacket that he found in a second hand store.