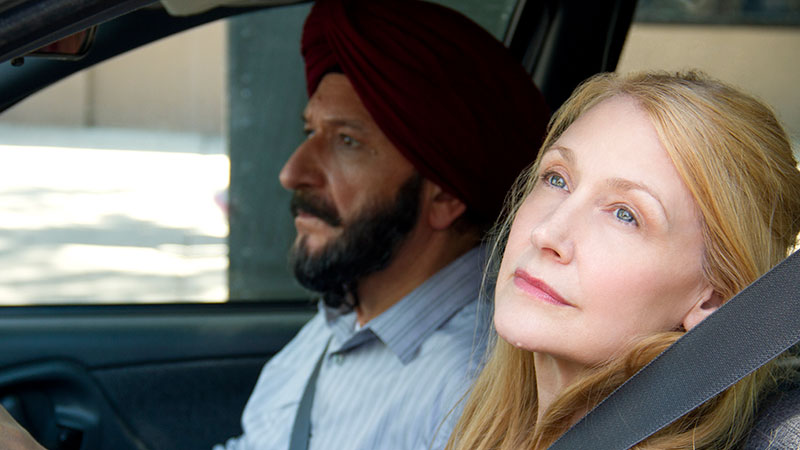 Wendy (Patricia Clarkson) is a fiery Manhattan book critic whose husband has just left her for another woman; Darwan (Ben Kingsley) is a soft-spoken taxi driver from India on the verge of an arranged marriage. As Wendy sets out to reclaim her independence, she runs into a barrier common to many lifelong New Yorkers: she’s never learned to drive. When Wendy hires Darwan to teach her, her unraveling life and his calm restraint seem like an awkward fit. 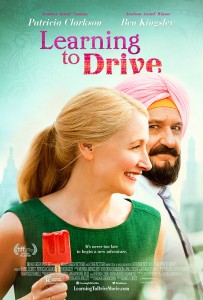 Screenwriter Sarah Kernochan was put in touch with Harpreet Singh Toor, a spokesman for the Sikh community in Queens. There she began her research, filling in the back story for her driving instructor. Harpreet escorted her into the temples, introduced her to illegal workers in cramped apartments, helped her find taxi drivers to interview.

Good stories are catching…and if anyone in the entertainment industry is ever exposed to a really good story, it can take hold and become as contagious as a cold on a crowded subway car.  Such was the case with author Katha Pollitt’s lightly humorous, soul-searching essay that originally ran in the New Yorker, relating her experiences taking driving lessons in New York while in her 40s.  Of course, it being a Pollitt piece, its subject was about a lot more than merely learning how to successfully pilot an automobile.  (The essay later became the titular work in a collection of her personal essays, published by Random House in 2007.)

About the time the essay came out, producer Dana Friedman had been scouting for a property with cinematic promise—one that held personal meaning for the filmmaker and that might also entertain and resonate with moviegoers.  During Friedman’s search for a writer with a kindred spirit who could take the promising set-up in the essay and expand it to fill a feature-length movie, she crossed paths with screenwriter Sarah Kernochan.

Kernochan observes, “Katha Pollitt’s original essay was a perfect little gem, perfectly faceted, perfectly fashioned.  It was somewhat lacking in basic drama, because in the story, Katha got along with her driving instructor extremely well. He was a New Yorker, a Filipino, but I just didn’t ‘see the poster.’ So I thought, ‘How can I create more distance between them that, in turn, has to be bridged?’  So I made the leap to a driving instructor very quickly, and the minute I did, I could ‘see the poster.’  Because, when you have the image of an older woman at the wheel in a car and a Sikh Indian in a colorful turban next to her, you immediately want to know what the story is.”

Not very long after her introduction to Kernochan’s script, Patricia Clarkson found herself near to wrapping production on the film Elegy.  One of the last nights of production—”after a couple of bottles of champagne”—she off-handedly mentioned her hopes of working together again to her director, Isabel Coixet, and co-star, Ben Kingsley.  Months later in Barcelona (filming Woody Allen’s Vicky Christina Barcelona), Patricia gave a copy of Learning to Drive to Coixet over dinner. As it turns out, Coixet also didn’t learn to drive until, as she puts it, “I was really old”. Isabel was excited by the prospect of working again with her former stars, but acknowledges that in independent film, it is a game of timing.

Ben Kingsley was gifted with a script, as promised by Clarkson.  And while the draw of reteaming with a fellow performer he held in esteem was tangible, his acceptance of the role of Darwan was also based on his own special process.  Kingsley explains, “My choices are often intuitive within the framework of the three key elements, which are cast, director and script.  Those came together well, so my choice was entirely intuitive.”

Broad Green Pictures was a relatively new independent shingle hung out by two brothers, Gabriel and Daniel Hammond, when the screenplay for Learning to Drive landed on their desks amidst, says Daniel “It was the first script by a female screenwriter about a female character that I’d read out of about 20 scripts that we had turned through in two weeks.  It was such a breath of fresh air to read something that didn’t have the same Hollywood ‘bro’ speed—like, we crack inappropriate jokes. It left the clichés behind. ”

The largely New York-based cast and crew were not-so-secretly thrilled to be working in their own city.  And even though Politt’s essay and Kernochan’s screenplay both rely heavily on the New York-ness of the environments surrounding the characters, with current production practices, the project could have just as easily chosen another metropolitan setting to stand-in for N.Y.C.  But that was not what anyone wanted.  The unique and specific nature of the city, filmmakers felt, was far too important to the story.