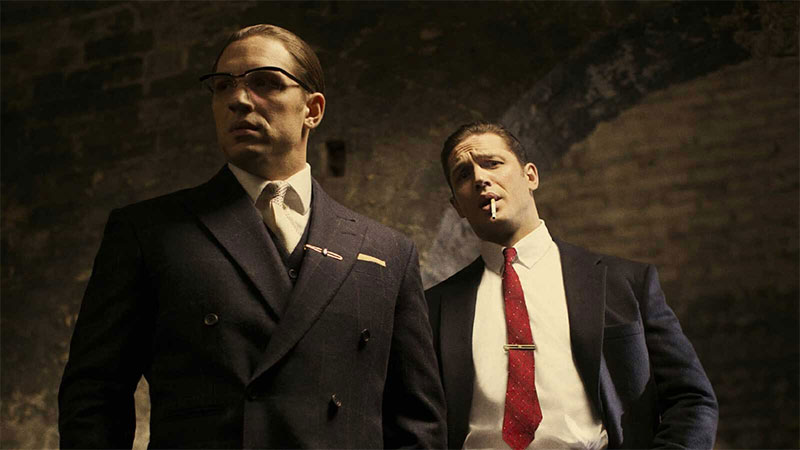 Written and directed by Brian Helgeland, Legend tells the story of Reggie and Ronnie Kray as they have the time of their lives, ruling over London in the middle of the Swinging ’60s. 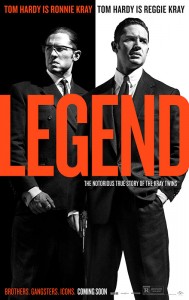 For the sequence where Ron and Reggie face off against Richardson’s goons, director Brian Helgeland positioned the brothers as far away from each other as possible so that he could cut from Hardy to Hardy during the hammer-swinging melee that follows.

“The first time I heard of the Krays,” says Helgeland, “it was a story that turned out to be a lie. That was a great and fitting introduction to them.” It was 1998 and Helgeland had been hired by Warner Bros. to work on a Led Zeppelin movie that didn’t quite make it up the stairway to heaven. But as part of his duties, he got to accompany Jimmy Page and Robert Plant on a world tour. One night, he got talking to a member of the Page/Plant entourage, and noticed the gentleman was missing a finger. Helgeland asked how he had lost the digit. The answer was simple and to the point: “He told me a story about how the Krays had cut off his finger. Subsequently, like so much of the of the Krays’ story, I learned it was a lie, or to be generous, a tale that was too good to pass up.”

While the Krays were imprisoned, a subculture grew around them, including dozens of books about their lives. One of the first, The Profession of Violence, was written by John Pearson, a journalist who had first-hand experience with the Krays. Sensing the opportunity to bring Ronnie and Reggie’s notorious exploits to a new audience, producer Quentin Curtis and his partner, Chris Clark, bought the rights to Pearson’s book. (A previous movie, directed by Peter Medak and starring Spandau Ballet’s Gary and Martin Kemp as the twins, was released in 1990.) “I still felt there was more to say on it,” explains Curtis.

Looking for the right partner to help them bring the story to life, they brought it to Working Title and Tim Bevan, who was immediately enthusiastic and had a take on the material that would set it apart from other movies about British gangster movies: “Make an American-style gangster movie here, based on their story.”

Bevan elaborates: “Because it had been done before as a movie, there had to be something that sets it properly apart, hence the idea of going to someone who was steeped in the tradition of American gangster movies, and giving it that style and feel.”

That someone was Helgeland, who had previously written the script for Working Title’s Paul Greengrass/Matt Damon thriller, Green Zone. More pertinently, perhaps, he was an American steeped in the tradition of American gangster and crime movies, as director of the Mel Gibson revenge movie, Payback, and Oscar®-winning co-writer of the classic, L.A. Confidential. Helgeland, interest roused by his first apocryphal encounter with the twins, had learned more about them over the years, but he admits that Bevan’s vision was what initially enticed him.

Helgeland threw himself into researching the Krays and their lives, visiting the locations that defined their lives, talking to surviving members of their crew (and their enemies), including the colourful retired gangster Freddie Foreman, and reading everything that could be read on the subject.

Costume designer Caroline Harris was instrumental in creating the visual tone for Legend. It began with photo research into the Krays, as well as the 1960s world that surrounded them. This world was more classic than swinging, and this classicism formed the basis for the characters who inhabited it.

Legend boasts an exceptional cast, with the likes of David Thewlis, Christopher Eccleston, Sam Spruell, Taron Egerton, Tara Fitzgerald and Colin Morgan joining Australian actress Emily Browning as Frances. “She was far and away Frances,” says Helgeland of her audition. “She worked so hard on her homework and on her accent and on the heart of her as well.”

But Helgeland knew that the film would belong to the actor who played Ronnie and Reggie. Crucially, if he could find the right man, he wanted both roles to be filled by one actor. “I thought one actor could potentially really nail that relationship between the brothers rather than negotiate it. It was a short list.” On it was one name: Tom Hardy.

With the film’s tight budget and schedule, cramming more than 100 London locations (barely any sets were used on the film) into just over 50 shooting days, Helgeland’s dream scenario—allowing Hardy to shoot one half of the movie as one twin, then return for the second role—was unworkable. Instead, on the 35 shooting days when Hardy had to play both twins, he generally started off the day as whichever brother had more screen time in the scene. More often than not, this proved to be Reggie, the brother whom Helgeland saw as the film’s lead. Then, once his scenes were done, Hardy would disappear into makeup and costume and return as Ron to film the remainder of the sequence. Face replacement was also deployed on rare occasions, with Hardy’s stunt/body double, Jacob Tomuri, giving as close an approximation of the actor’s body language as possible.