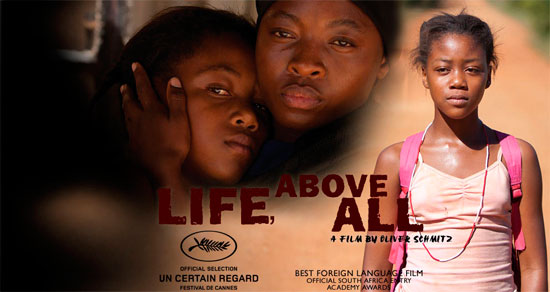 Life, Above All is a 2010 South African drama film It was screened in the Un Certain Regard section of the 2010 Cannes Film Festival. This an emotional and universal drama about a young girl (stunningly performed by first-time-actress Khomotso Manyaka) who fights the fear and shame that have poisoned her community. The film captures the enduring strength of loyalty and a courage powered by the heart. Directed by South African filmmaker Oliver Schmitz (Mapantsula; Paris, je t-aime). 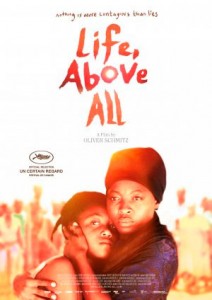 Life Above All was released May 18th 2010 in France

The 100 minutes film was selected as the South African entry for the Best Foreign Language Film at the 83rd Academy Awards  and made the final shortlist announced in January 2011. The film was adapted from the novel Chanda’s Secrets (2004) by Allan Stratton. It’s was picked up for release in the United States by Sony Pictures Classics.

Oliver Schmitz, the German director has a panache for telling socially relevant stories about South Africa. In the hey days of the apartheid years he made the classic and iconic Mapantsula which through its lead character Panic, a petty criminal, the international world was able to see how bad the system is through Panic’s story of political consciousness been awaken by events happening around him.

In the 90’s he made a post apartheid film Hi-Jack stories;it did not fare that well but touched on lure of gangsterism, hijacking and criminal behavior in the new South Africa. It’s very poignant in the post Madiba- post Mbeki years and in the year of the Zuma presidency that Schmitz tackles the thorny issue of the shame that is associated with HIV/AIDS and the burden of child headed families due to this epidemic. Although immediately one would like to associate Life,above all with Yesterday but Life above all is a cut above Yesterday .

It feels more sincere, touching and less whimsical than Yesterday, although the films are both set in the rural areas, both use vernacular and deal with stigmatization. I think the choice to tell the story from the child’s perspective in Life, Above All is refreshing and the film actually feels more contemporary than Yesterday.