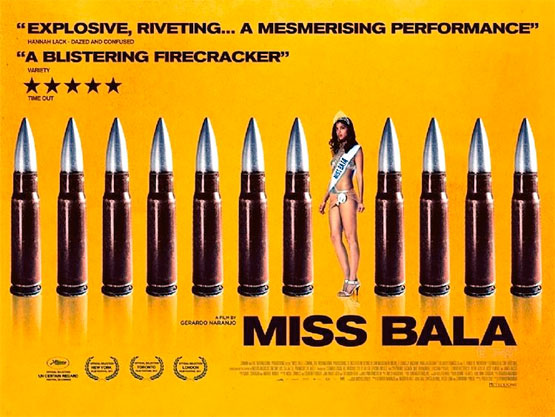 Miss Bala is a 2011 Mexican drama film written and directed by Gerardo Naranjo. The film premiered in the Un Certain Regard section at the 2011 Cannes Film Festival. 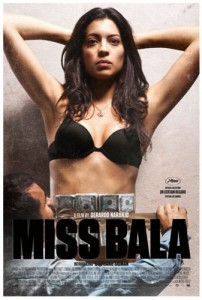 Miss Bala is loosely based on a real incident, in which 2008’s Miss Sinaloa, Laura Zúñiga, was arrested with suspected gang members in a truck filled with munitions outside Guadalajara, Jalisco.

From the very first shot, the story is told through the eyes of the innocent Laura Guerrero (Stephanie Sigman). A tall, willowy girl from a poor family in Tijuana, she dreams of participating in a beauty pageant with her best friend Suzu. Their plans take a nasty turn in a gangland disco.

Laura is in the bathroom when armed men slip over the wall and start firing on the dancers, leaving a bloodbath behind them. As an eyewitness, she’s kidnapped by the hitmen. Her ravishing looks may be what saves her life because instead of killing her, the inscrutable drug lord Lino (Noe Hernandez) forces “the skinny girl” to become a driver and drug runner for the gang.

From that moment on, the film’s pace races through events in a chain of escalating violence, tension, smoke and gunfire. The gang lords appear to control the police but not the American DEA agents who are their implacable enemies. They speed through Baja in SUVs and huge trucks full of corpses as the action shifts unexpectedly, leaving the viewer uncertain what will happen next.

To save her father and brother, Laura lets Lino tape wads of money around her tiny waist. She gets past U.S. border police and is flown in a small plane to a rendezvous with Lino’s American cohort (James Russo), who sends her back with fresh weapons and ammo. But someone has betrayed them, and when Laura arrives in Baja, trouble is waiting for her.