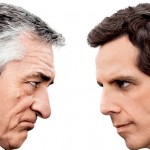 In January 2010, the release date for Little Fockers was pushed back from July 30, 2010 to December 22, 2010 because Universal, Paramount and DreamWorks hope to benefit from the long Christmas weekend.

It is the first film in the series that was not directed by Jay Roach and was instead directed by Paul Weitz. However, it was produced by Roach. It was announced on August 24, 2010 that Dustin Hoffman will reprise his role as Greg’s father, Bernie Focker.In addition to the original cast, Little Fockers stars Jessica Alba, Laura Dern and Harvey Keitel.

Writer John Hamburg stated the film will deal with “themes of death and divorce and all these real things that as we get older, we start to think about, but in a really comical way.”

Outside the United States, this will be the first film in the series to be released by Paramount Pictures, which acquired the DreamWorks back catalog in 2006 (and owned the studio itself until 2008), including co-ownership in the Meet the Parents franchise. DreamWorks remains as a co-copyright holder with Universal Studios (as DW Studios).

On August 25, 2010, it was revealed that the movie will have several re-shoots to bring back Dustin Hoffman as Bernie Focker. When the movie was in pre-production, the studios couldn’t reach an agreement with Hoffman, but finally decided to bring him back for the film.