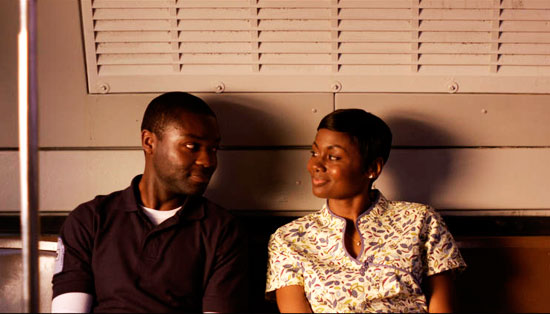 Ava DuVernay’s elegant and emotionally inspiring debut portrays the universal dilemma of how a woman maintains herself as she commits to loving and supporting someone through hardship. Featuring luminous performances by a cast of rising stars led by Emayatzy Corinealdi and Omari Hardwick, Middle of Nowhere infuses gravity and grace into the prison tale and marks the arrival of an important new directorial talent. 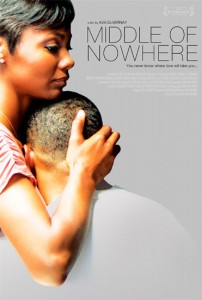 Veterans such as Lorraine Toussaint, Sharon Lawrence and Dondre Whitfield round out the stellar cast of emerging talent including Edwina Findley, Troy Curvey, Maya Gilbert and Nehemiah Sutton

In 2002, entertainment publicist Ava DuVernay began writing a screenplay set in her hometown of Compton, California. A far cry from the high-profile films she represented for her studio clients, the script for MIDDLE OF NOWHERE evolved from observation, imagination and the desire to chronicle the ways we maintain love and cultivate hope when all seems lost.

From the beginning of the writing process to the first shoot day in June 2011, DuVernay continued to represent her film and television clients, founded a minority film distribution company and directed a short, three documentaries and her first narrative feature, I Will Follow. With the indie box office success of I Will Follow in March 2011, DuVernay’s producing partner Howard Barish of Kandoo Films marshaled the financial resources in just three short months to make MIDDLE OF NOWHERE with private equity.

In addition to Barish and DuVernay, veteran producer Paul Garnes and Tilane Jones of DuVernay’s Forward Movement banner rounded out the producing team.  Production lasted 20 days in the summer of 2011 in California, specifically in South Central Los Angeles, Monterey Park and the San Fernando Valley.

The cast came together quickly. Lead actress Emayatzy Corinealdi who portrays the main character “Ruby” was discovered through the audition process. “Emayatzy came in to read for another part, and I was immediately taken with her level of craft and her whole vibe. She brought such depth and nuance to the role,” explains DuVernay.  “She’s named after a Panamanian princess, and she was our princess on set. A beautiful spirit. We were so fortunate to find her.”

DuVernay had worked with actor Omari Hardwick (“For Colored Girls”) who portrays Ruby’s incarcerated husband “Derek” in her previous film, I WILL FOLLOW.  She was eager to welcome the Atlanta native onto her new production. “Omari’s work is layered and vulnerable. Plus, we work very well together and he’s a real joy to have on set. So, that casting was a no-brainer for me. I was just lucky he wanted to come out and play with us again,” reports DuVernay.