Moneyball is a biographical comedy-drama film directed by Bennett Miller, starring Brad Pitt, Philip Seymour Hoffman, Robin Wright, Jonah Hill, Chris Pratt and Casey Bond. It is based on the true story of Billy Beane, general manager of the Oakland Athletics, and his attempt to create a competitive team despite Oakland’s unfavorable financial situation. Shooting took  place at Blair Field, the Sports Stadium for Wilson High School in Long Beach, California and the Oakland-Alameda Coliseum. 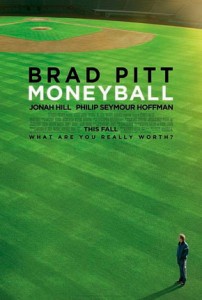 During Moneyball pre-production, director of photography Adam Kimmel was arrested in Connecticut on sexual assault and weapons and explosives possession charges. He was replaced by Wally Pfister

The story centers on Billy Beane and his arrival as Oakland’s general manager. Through analysis and a new, non-traditional sabermetric approach to scouting players, Beane attempts to create a competitive baseball team at a fraction of the cost of the large market teams.

The film’s script was originally written by Stan Chervin, and Steven Soderbergh replaced David Frankel as director. “I want you to not realize how much information is being thrown at you,” says Soderbergh, when asked how he was going to make a film based on statistics entertaining.

The script called for elements considered non-traditional for a sports movie, such as interviews with real-life players, and as a result Soderbergh was let go. He was replaced by Bennett Miller,  and Aaron Sorkin rewrote the script.Also, the role of Paul DePodesta, formerly to be portrayed by Demetri Martin, was recast, and Jonah Hill was picked for the role. Filming began in July 2010.