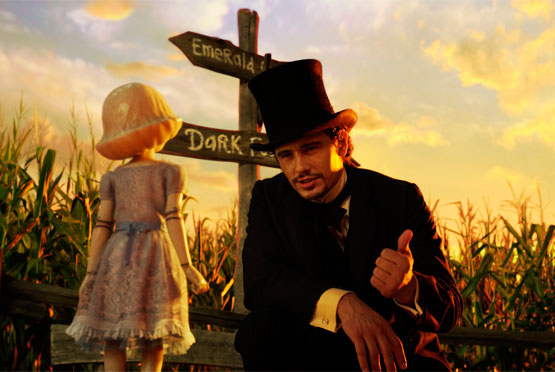 Oz the Great and Powerful is a 2013  fantasy adventure film directed by Sam Raimi. The film is inspired by L. Frank Baum’s 1900 novel The Wonderful Wizard of Oz, and is set before the 1939 film The Wizard of Oz. The film stars James Franco as Oscar Diggs, otherwise known as the Wizard of Oz. It also stars Mila Kunis as Theodora, Michelle Williams as Glinda, and Rachel Weisz as Evanora. The film is  released by Walt Disney Pictures. 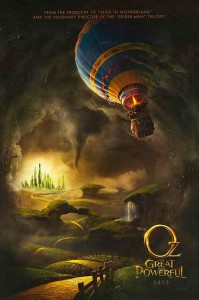 In April 2010, Robert Downey, Jr. was in talks with producers for the part of Oz, but by that January he was no longer involved and the studio was in discussions with Johnny Depp, who had appeared in Disney’s Pirates of the Caribbean franchise and Alice in Wonderland. By the end of February 2011, James Franco was in final negotiations to star in the film, marking the the first time that Franco and Raimi have worked together following the conclusion of the Spider-Man trilogy. Casting calls were put out for local actors in Michigan.

Raimi opted to use practical sets in conjunction with computer-generated imagery during filming. Physical sets were constructed so the actors could have a visual reference, as opposed to using green screen technology for every scene. Chroma key compositing was only used for background pieces.

Zach Braff and Joey King were on set, recording their dialogue simultaneously with the other actors, whenever their CG characters were present in a scene. Puppetry was employed for a physical version of the China Girl to serve as a visual key-point for actors to manipulate.

Composer Danny Elfman noted that the film’s score was accessibly quick to produce, with a majority of the music being written in six weeks. Regarding the tonal quality of the score, Elfman stated; “We’re going to take an approach that’s old school but not self-consciously old-fashioned. Let the melodrama be melodrama, let everything be what it is. I also think there’s the advantage that I’m able to write narratively, and when I’m able to write narratively I can also move quicker because that’s my natural instincts, I can tell a story in the music.“